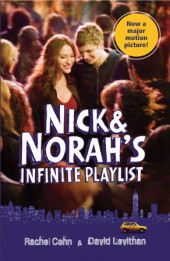 Every once in a while it’s nice to see a sweet, fun, brisk and intelligent little comedy. Ghost Town didn’t completely do it for me but this delivered. Maybe others won’t enjoy it as much as me but I luckily was able to connect with it quite deeply. It probably has to do with being a hipster teenager myself, like many of the characters in the film.

The film centers on two teenagers. Nick (played by Michael Cera) is a aspiring rocker who still can’t get over his ex. Norah (played by Kat Dennings) is a lonely girl who feels mocked by her slutty friends for her lack of love life. These two meet a gig of Nick’s band and instantly hit it off. The rest of the film centers on their big wacky adventure through New York City with their friends. Sure, there are many movies like this. Or should I say many teen movies like this. But it has such a certain sweetness and relatable feel that the occasional cliche is forgivable.

I have to mention of the reasons why I loved this movie so much. The soundtrack. Holy crap. So much amazing indie stuff. Like Modest Mouse, Vampire Weekend, Rogue Wave, The Raveonettes and so many other amazing bands. It helped draw me in and relate the characters. So it just there sit there and play over the film. It guides us along

But the big success of this film comes from the chemistry of the two leads. Cera has been criticized as of late for playing the same character in everything he does, the awkward dweeb teenager. Sure, he still uses his trademark awkwardness but it fits the character’s longing and sensitivity. Kat Dennings, who I had only seen before in The 40-Year Old Virgin, gives a revelatory performance. She simply needs to be in more movies. She’s spunky but never comes off as overly-quirky. Throughout she’s firmly grounded in realism but still perfect girlfriend material.

So maybe you won’t connect with this as much as I did. But I still find it to be a special film that everyone should go check out. And no, Sony is not paying me for this review.