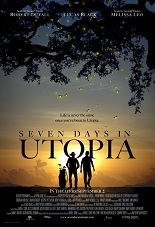 I generally keep my faith out of ScreenGeeks.com. I’ve never shied away from the fact that I’m a Christian, but I’ve made a conscious decision not to base what we do around that fact. The point of this site is to talk about film and our love of this beautiful art form. With that in mind, I hope you’ll indulge me for this review as my thoughts when it comes to Seven Days in Utopia are directly affected by my faith, beliefs and convictions.

Christian movies have always had an uphill battle. The apparent train of thought held in the Christian filmmaking community is that the genre must always be in service to the message. This means that certain things can NEVER occur in a Christian movie. Things like swearing, violence, sexualization of any kind gore, crude humor, or anything relating to dark spiritual forces just don’t show up in Christian movies. The theory is that by even showing these things, you are glorifying them, which isn’t what good Christians do. Living by that one rule, most Christian movies end up sacrificing things crucial to the cinematic experience like solid set design, an engaging story and competent direction, writing and acting. If you were to look at most Christian movies, the problem doesn’t lie in the religious message. The problem is everything else.

Over the past ten years or so, though, some films have dared to buck that trend. This year’s Soul Surfer makes no bones that Christianity and faith are incredibly important to the Hamilton family, but they don’t make a display of gratuitous Christianity that crams that faith down your throat. The faith is always present and integral to the entire family, but it isn’t reduced to a spectacle. In 2006’s The Second Chance, writer/director Steve Taylor brought what I think is the most honest and powerful Christian film to date by turning the camera on the church and exposing us for what we are, human. Most importantly and shocking, though, is that it proved Michael W. Smith could act. Yes, there are a couple of swear words, but they reflect the world we live in and the movie questions the way we live as the Christian church in America.

So now we come to the movie I’m supposed to be reviewing. There’s just no nice way to put it; Seven Days in Utopia is a complete failure in every goal it could possibly be setting out to achieve. Outside of a performance by Robert Duvall that is fuelled by pure conviction, there isn’t a single thing to recommend about this movie.

The story is about a golfer named Luke (Lucas Black) who loses it while being at the cusp of becoming a superstar and finds himself in Utopia, Texas, where Duvall’s Johnny offers to help Luke get his groove back if he’ll stay in town for a week. Having nothing to lose, Luke accepts the offer and finds himself stuck in a town with what appears to be only one woman under the age of 50, an emotionally stunted Texas hick who is such a jerk he gives Texas hicks a bad name, and other one-dimensional characters who barely merit mentioning. Luke has a Bagger Vance-like experience with Johnny, goes back to golfing and I’ll let you guess how the movie ends. The worst part is that you’ll still be guessing even after the movie is over, but we’ll get to that later.

I’m purposely leaving out the names of the other actors involved in this film because I firmly believe the awful performances are not their fault. Exhibit A for this is just how wasted Joseph Lyle Taylor is. You might know him as Doyle Bennett in the FX show Justified. In that show, Taylor shows he has acting chops and can be compelling. In this movie, however, he’s relegated to being the overbearing dad without a single redeeming quality. I could go down the list of actors and give them a single trait like this ad nauseum, but I won’t. The point is that writer David Cook and writer/director Matt Russell have crafted a supremely boring movie that by most accounts would be (and should be) overlooked as harmless fluff.

The problem becomes that this movie also has Christian themes…or at least it’s supposed to. Being a G-rated movie geared toward adults means 99% of the time, it’s a Christian movie. It’s entirely possible to do this right. Disney’s The Rookie is proof positive of that. The filmmakers decided that they needed to make a movie that is as family-friendly and toothless as other Christian movies, but I guess they forgot to put the Christian part in there. Instead of having the message most Christians would expect, the movie ends up meandering philosophically throughout the movie and dabbling in themes that could be interpreted as Christian, but also qualify as Buddhist. It’s like they were scared to say the word Jesus. So we end up with a movie about golf, but is actually about how life is more than golf…yet doesn’t actually explain what the definition of what that “more” is. This results in an intellectually insulting piece of trash.

Say what you will about the Left Behind movies, Fireproof, or if you’re older like me, the Thief in the Night movies from the 70’s, but those movies have a definite message. Even if they are a complete failure of an artistic exercise, there is an integrity to them. You know that you’re going to get crappy acting and directing, but a positive Christian message, and that sells these days. It’s like watching a Troma movie. You know EXACTLY what to expect when that label is attached and you’re never disappointed. Yes, I just compared the Christian film industry to what could legitimately be called the only truly grindhouse studio around. I’m a little stunned I went there myself.

Before I get to my main problem, the ludicrous amount of product placement must be addressed. I’m pretty sure Calloway Golf must have paid for at least half the budget of this movie. I found myself yearning for the subtlety of Snakes on a Plane and how they discreetly placed products in scenes. If there is ANYTHING golf related, Calloway is there. If someone is wearing a baseball hat, it’s a Calloway hat. When Daddy Dearest tries to make up with his boy? He said he was sorry with “Calloway’s latest and greatest driver”. I also found out after the movie from one of my coworkers that every single pro golfer who appeared in the movie is sponsored by the same company. I’ll give you two guesses who that company is and the first two don’t count. Seriously people, have a little dignity.

I think I would’ve been willing to just write Seven Days in Utopia off as just another failed attempt at a mainstream Christian movie, but I haven’t reached the ending yet. Yes, I am going to spoil the end of the movie. I am usually vehemently against spoilers, but I feel a responsibility to you, the reader, to warn you of what you have ahead of you should you decide to buy a ticket and catch this atrocity over the weekend. I’d warn you to stop reading if you don’t want spoilers, but this is important enough that you need to read the next bit.

The movie doesn’t end. No, seriously. It doesn’t have an ending. There’s a scene with Duvall narrating that puts a perfect bow on the film that is in keeping with everything else that has happened previously and is in the spirit of the movie. Any crappy filmmaker would have let the fade out happen and then role the credits. Apparently THESE filmmakers decided they hadn’t insulted the audience enough. After said fade to black after they establish that what happens in the climactic moment doesn’t matter, we get two lines of text, each followed by a fade out.

“Want to see how the story ends?”

A better ending would have been a terrorist running onto the golf course, detonating a suicide bomb and killing the entire cast followed by a grand finale consisting of a crane shot widening out and the maimed corpses breaking out into a chorus of “Always Look On the Bright Side of Life”. It sure would have been in better taste. You don’t take people’s hard earned money and then tell them to go to a freaking website that ends up being proselytizing tool. Here’s tip for the filmmakers: If you want to make this movie a pathetic attempt to be an evangelism tool, don’t take people’s money and then pull a scam like this. At its best, you are telling the audience that you’ve just wasted their time because you don’t know how to end a movie. At its worst, you are cheating the people you’re trying to reach out of their hard earned money in quite possibly the most despicable way possible. With the purchase of a ticket comes the implied agreement that the movie I am about to walk into will end on screen. The ending might be awful, but it WILL end. Had I purchased a ticket to see this movie, I would not have left the theater until my money was refunded. As it is, I think the studio owes me gas money for my drive from Colorado Springs to Denver and back to see it in the first place.

In my opinion, what these weasels did was undermine the tenants of the faith that I hold as sacred and dear. If you have to pull a gag that would make P.T. Barnum slap his head in disbelief that he never thought of pulling a stunt like this in order to do what can only be called tricking people into Jesus while taking their money, the message can’t be that good in the first place. The fact that these vultures can actually sleep at night while releasing this movie for a profit is appalling. Robert Duvall’s performance would have scored this movie as a 2 out of 4, but this disgusting display brought it down to a 1 out of 4 and might spur me to open up the mythical 0 out of 4 for debate.

I feel it’s important to say that I don’t point to Seven Days in Utopia as being an example of Christian cinema. Films like Soul Surfer and The Second Chance show glimpses of what the genre could become. I’d argue that films like Kevin Smith’s Dogma and Terrance Malick’s The Tree of Life should be included in the genre, even if they are films that don’t fit the typical Christian movie mold. That’s kind of the point, though. Until Christian filmmakers understand it’s possible to make a movie where there message is in service to the story/genre without compromising the message, we’re never going to the greatness I see as possible, and that’s a shame. I’m never going to stop my search for the great Christian film, but I can tell you that it isn’t even worth stopping to see the scenery in Utopia.