Cary Joji Fukunaga’s No Time to Die, which marks Daniel Craig’s final performance as James Bond, is the least satisfying 007 thriller in decades. I’d have to think back to the Roger Moore era to come up with a title in this franchise that made me this unhappy. The culprit isn’t Fukunaga, the True Detective genius who has the eye and control as a filmmaker to stage remarkable moments of spectacle. Nor is Craig entirely to blame, though his mostly joyless, all-over-the-place performance is one reason the running time seems far longer than 2 hours and 45 minutes. Truly, the reason Craig’s tuxedoed swan song is a memorable but lumpy dud can be traced to a story conceived of by four writers, who concoct multiple subplots at odds with one another.

A startling but contrived opening (why would an assassin wear a cumbersome mask that eliminates peripheral vision?) establishes that this will be the least fun Bond movie since License to Kill (which at least had Wayne Newton for levity).

Craig’s Bond takes nearly the entire film to realize he’s up against a wealthy monster, played by Bohemian Rhapsody Oscar winner Rami Malek, and that he’s now a footnote in the British Secret Service. Bond must choose between the love of his life (Lea Seydoux, always great) or a life of constant danger. Also, Blofeld (played by an always wily Christoph Waltz) is now kept in a Hannibal Lecter-ready prison. Basically, everything that was nicely tied up in the prior Spectre is now extended to the breaking point.

So much for escapism- the threat posed is a globe-spanning virus and a character is even told to go into quarantine. There are too many annoying side characters, like a wacky Russian scientist and Felix Lighter’s pal, an unabashed fan of Bond’s career, an overly self-conscious touch. Bringing a small, adorable child into the third act and putting her in terrible danger is a cheap touch; so is the way the screenplay conveniently just allows her to literally run away from her captivity. Seriously, this screenplay is the pits.

Lashana Lynch’s flashy turn as Nomi is a standout, though the character winds up in the background- it was a mistake for the writers to provocatively give the character a title once belonging to Bond, only to have her give it back to him later. If you’re going to change things up in a 60-year-old film series, then own it.

Ana de Armas’ cartoonish Paloma feels like a holdover from the 60’s era Bond and her one big sequence, a mixture of fights, shootouts, a virus released in public and slapstick, is tonally off.

Rami Malek’s ultra-mannered performance grows tiresome immediately, though the casting poses a giant continuity problem: he’s at least a decade too young for the role. The age of the actor matters, as Malek’s gravel voiced, scar-faced weirdo is supposed to have been in Madeline’s life since her childhood, but Seydoux is, respectfully, clearly older than Malek.

In terms of action, there’s a stunt in which a motorcycle shoots up what looks like 3 stories into the air. Much of Bond’s machine gun battles have a video game aesthetic, but that’s fine when it looks this good.

How will this hold up for the Craig era of Bond? I’m probably the wrong person to ask. I thought the 2006 Casino Royale was very good and refreshingly emotional, whereas Quantum of Solace (2008) was obviously scattershot at the story level but delivered as an action movie. Skyfall (2012), while enormously overrated, was far better and hit some franchise high notes (director Sam Mendes became a franchise MVP). Then there’s Spectre (2015), which most people disliked but delivered everything I’ve ever wanted from a Bond movie (albeit one obviously inspired by the films of Christopher Nolan). It even made my ten best of the year list.

There’s lots here for 007 to embrace, even as Craig’s own grumpy reluctance to keep playing the role has carried over into this movie. Also- Billie Eilish’s title song reflects the film it was made for: both are lush and overproduced.

I won’t give the ending away and will only say a tall dive off a cliff and a little think tank session with Q could have easily solved the obstacle presented in the big climax.

Longtime Bond fans will enjoy a nice visual shout out to Bernard Lee, the original M (the role is currently embodied by a dour Ralph Fiennes). There is also the persistent references to On Her Majesty’s Secret Service (1969), the one time a Bond movie was led by an Australian underwear model but, nevertheless, one of the best entries, if not the absolute best, in this entire series. Initially it’s just the romantic subplot and a few orchestral cues but No Time to Die goes out of its way to reference that film in blatant ways. It was nice to hear the greatest James Bond movie theme song over the end credits but a little of this goes a long way. I’m glad the filmmakers are aware of this long debated 007 entry but rubbing our faces in it doesn’t make up for how that movie was rich and surprising, whereas this one is overcooked and tired.

The final end credits tell us JAMES BOND WILL RETURN. I certainly hope so, just not like this. 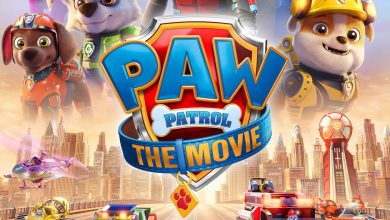