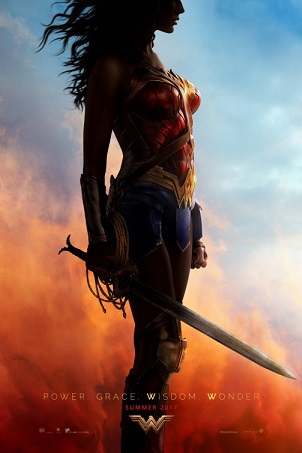 I’d like to take this moment to say “I was wrong”.  Having only seen Gal Gadot previously in Fast Five, I doubted her ability to play Wonder Woman.  There’s wasn’t enough of her in Batman V. Superman to really judge her capability, but there was a lot of promise on display.  In her own film, however?  Gadot has become the shining star of the DCEU.  It’s one thing to kick butt.  It’s an entirely different matter to portray the incredibly wide array of emotions this film required of her, and she pulled it off effortlessly and made the character all her own.

Chris Pine was no-brainer casting as Steve Trevor and he comes through in a big way.  While embracing the playboy image of spies of the day, his performance as Trevor was willing to have his opinion of women in general and Diana in particular be swayed.  His chemistry with Gadot was spectacular and completely engrossing.

It’s also well worth mentioning how great Connie Nielson and Robin Wright are as Queen Hippolyta and Antiope respectively.  One failing of the portrayal of Themyscira is that inevitably the Amazons are portrayed as models who love to frolick in the water.  Instead, we’re treated to performances by two undoubtedly beautiful women who are clearly warriors with the scars to prove it.  The casting of all the Amazons was frankly inspired and shows the kind of casting diversity sorely lacking in Hollywood these days.

It may be shocking that it’s taken this long to get to talking about the tone of the film, but there’s a ton to love about Wonder Woman.  Quite possibly the most wonderful thing about this film is its juggling of tone.  Make no mistake, Wonder Woman tackles dark issues like suffering and pain with an appropriate and perfect touch.  I’d argue that it goes darker than any of the other DC movies.  However, it balances that with hope, fun and humor.  There’s no way this is the official message of the film, but it feels like Wonder Woman is looking at its fellow DC projects at Warner Brothers and saying, “THIS is how you make a good comic film”.

If there’s anything to be critical of, it’s really the presentation of how Diana finally realizes her full power.  This situation has been criticized in other reviews as Diana needing a man’s love to finally unlock her full potential.  While the flashback could definitely be seen that way, there are quite a few instances of Diana pointedly noticing and trying to understand the affection of people in the film, whether it’s a village rejoicing in its liberation from an occupying force, scenes of couples embracing or her comrades in arms joining in an embrace of unity at what appears to be their final fate, the film does a good job of laying out the case for hope through love.  Yes, those scenes could have been incorporated into the flashback before the climactic scene, but it’s a minor nitpick that simply shouldn’t be put under a magnifying glass at the expense of this treat of a film.

Seeing the Justice League trailer before this film, I still don’t have any hope for it to be any good, but Wonder Woman gives us all hope for future DC projects.  That’s a remarkable thing because I’ve been without that hope for going on four years now.  Growing up a DC fanboy, I’ve wanted them to right the ship and tell compelling stories in their own way.  I might finally get my wish going forward.