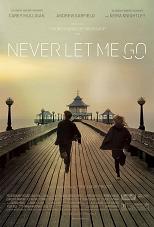 NOTE:  By necessity, this review will contain some spoilers.  Read at your own discretion.

Never Let Me Go is an interesting movie, it is set in an alternate version of Britain where cloning has been perfected and is used regularly for the prevention of most diseases (something about organ donations, they never go into it much as this is only a backdrop). The film follows the life of a clone, Kathy H (Carey Mulligan), and the people intertwined in her life (mainly, two other clones, Knightly and Garfield). The premise is a very fascinating one but sadly it comes with barriers. Can an audience relate to this new world that’s been created, does anyone know the pain of what it is to be a clone? Perhaps it is just my age, but I was unmoved by the ideas that these clones were made just to die… maybe I have just come to terms with my own mortality (morbid much), but something tells me wide scaled audiences might have the same issue.

Despite my feelings on the plot, the movie is gorgeous. This is a passion project for Romanek (a man whose passion projects rarely come to fruition) and with this he shows his passion. What made me smile the most was the appearance of England, it looked real which is something missing from most mainstream films set over here (especially from an American director). The whole country did not seem glamorous; there were no blue skies, no big lavish estates (though there was a nice shot of a grim looking council estate), the locations felt real and raw, which really added to the atmosphere of the movie. I can’t wait to see more from this man, he is truly one of the more interesting directors out there. I feel the only point he lets me down with this film is that it does not deal with dark, socially relevant topics that his previous film, “One Hour Photo”, dealt with so majestically, I would like to see him deal with similar biting material once more.

The performances were good; Mulligan is always a delight to have on screen (though even she couldn’t save “Wall Street: Money Never Sleeps”), Garfield is the next big thing, there is no denying it and even in a small role Sally Hawkins brings flair to her role. Even Domnhall Gleeson, who I thought was awful in “Sensation”, gives a strong and engaging performance during his small screen time. Unfortunately (and I hate to say this because I’m actually a fan of hers) Keira Knightley really lets the film down, she seems to be in a completely separate movie from everyone else. Whilst Garfield and Mulligan keep their characters reserved and realistic, Knightley seems to be over the top and just doesn’t seem to fit in with the world she has been put in, maybe that says something about her character but sadly I just found her annoying. I must also congratulate the casting department on finding children who are nearly identical to the actors they are portraying, Isobel Meikle-Small who plays the young Kathy H is so similar to Carey Mulligan that I didn’t even notice the difference when Ms. Mulligan herself took over the role.

The film isn’t bad, it has some great stuff going for it like its wonderful direction, its performances, a wonderful story and an intriguing new world to deal with. I feel it is the execution of Alex Garland’s screenplay that has failed to wow me into this film. As I said at the beginning, it is an interesting movie, sadly it is one I just couldn’t muster up enough interest for; it is a shame, but not a tragedy.