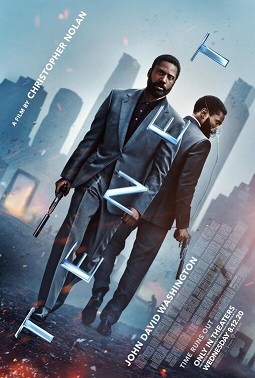 Writer/ director Christopher Nolan’s Tenet was the first movie I’d seen in a theater after a seven-month hiatus, which might be the longest I’ve ever been away from a movie theater.

The experience of returning to a physical theater, and watching the film itself, was an overwhelmingly positive experience. I felt safe in the theater. However, I respect the decision of some to avoid going into movie theaters until coronavirus is a thing of the past. Returning to a big screen movie theater, even with a mask on, was a joyous time for me. It also helped that Tenet is an incredible movie. Whether it’s on the big screen or at home, Tenet needs to be experienced.

John David Washington stars as a nameless secret agent who, after a near-death experience in which he never compromised his team, is promoted to the position of an off-the-record shadow agent. The discovery of a new technology, involving “inverted” weaponry, leads our hero to spy on a monstrously wealthy and incredibly dangerous suspect (played by Kenneth Branagh), who, in. words of one character, is planning something “worse than World War III.”

Washington is playing a character most men wish they could be all the time- a man of action, always efficient, reliable and competent in any situation. BlacKkKlansman proved Washington had serious talent but this shows how powerfully he can carry a movie. Washington has the kind of presence and confidence you’d expect from a veteran movie star.

Robert Pattinson continues his wonderful transformation from teen idol star of a bad franchise to a startlingly dynamic character actor and risk-taking leading man. He’s especially charming here, as the depth of his character’s secret brings a touching quality to his role. Elizabeth Debicki, following up on her terrific, scene stealing turn in Widows, is first rate here as an abused wife who will do anything to protect her son. While Branagh has played villains before (even Russian villains, as in Jack Ryan: Shadow Recruit) but he’s never been as fierce and intimidating as he is here.

Regarding the film’s wild premise, the characters on screen suggest we just go with it, which is great advice. The logistics of this world is a lot to process at times, with some scenes having characters move forward through time while others are literally moving backwards and vice versa. The real mind blower is considering how difficult, bordering on impossible, it must have been for Nolan to stage all of this. The opening sequence alone, featuring an opera house with hundreds of extras, was presumably a daunting task to accomplish.

This is easily Nolan’s most pretentious film; how could it be anything else, when the main character’s name is The Protagonist and the concept of “inversion” takes pages of exposition to explain over the course of a two-and-a-half-hour running time? The score by Ludwig Goransson is unusual, often exciting but, like Tenet overall, a bit much; at times, the music flares up so prominently in a scene, it distracts rather than adds texture.

The last time Nolan made a movie this full of itself, over-written and crammed with dialog to explain a demanding scientific concept, it was Inception. While that movie remains a just-about-perfect masterpiece, Tenet come close to matching it; Nolan’s latest impresses with the scale of its vision, the novelty of if its cerebral notion and the dazzling manner in which the film visualizes it.

If there’s a missed opportunity here, it’s that Nolan doesn’t end on the kind of haunting, lingering final image that he’s become known for. The concluding imagery of his Memento, The Prestige, Inception, The Dark Knight Rises or Interstellar, for example, leave the story open to further possibilities and ongoing interpretations. Here, the story wraps up in a manner that is tidy but still feels abrupt; perhaps Nolan simply wanted this one to end firmly, without suggesting an ongoing franchise.

As a large-scale fable about how the unbelievably rich and powerful have too much power, there is a scary plausibility here that the story maintains, even as the audience is plunged down a wild rabbit hole in the third act. The viciousness of Branagh’s character in particular is jolting, though his self-serving, power-mad type of criminal won’t be unfamiliar to anyone who reads the daily news.

By the third act, the action is overwhelming, though early word that the film is difficult to follow is highly exaggerated. The specifics of the world Nolan carefully crafted and its bizarre logic are complex enough, but the story has an emotional center; you may not grasp every immediate plot turn but you’ll always care.