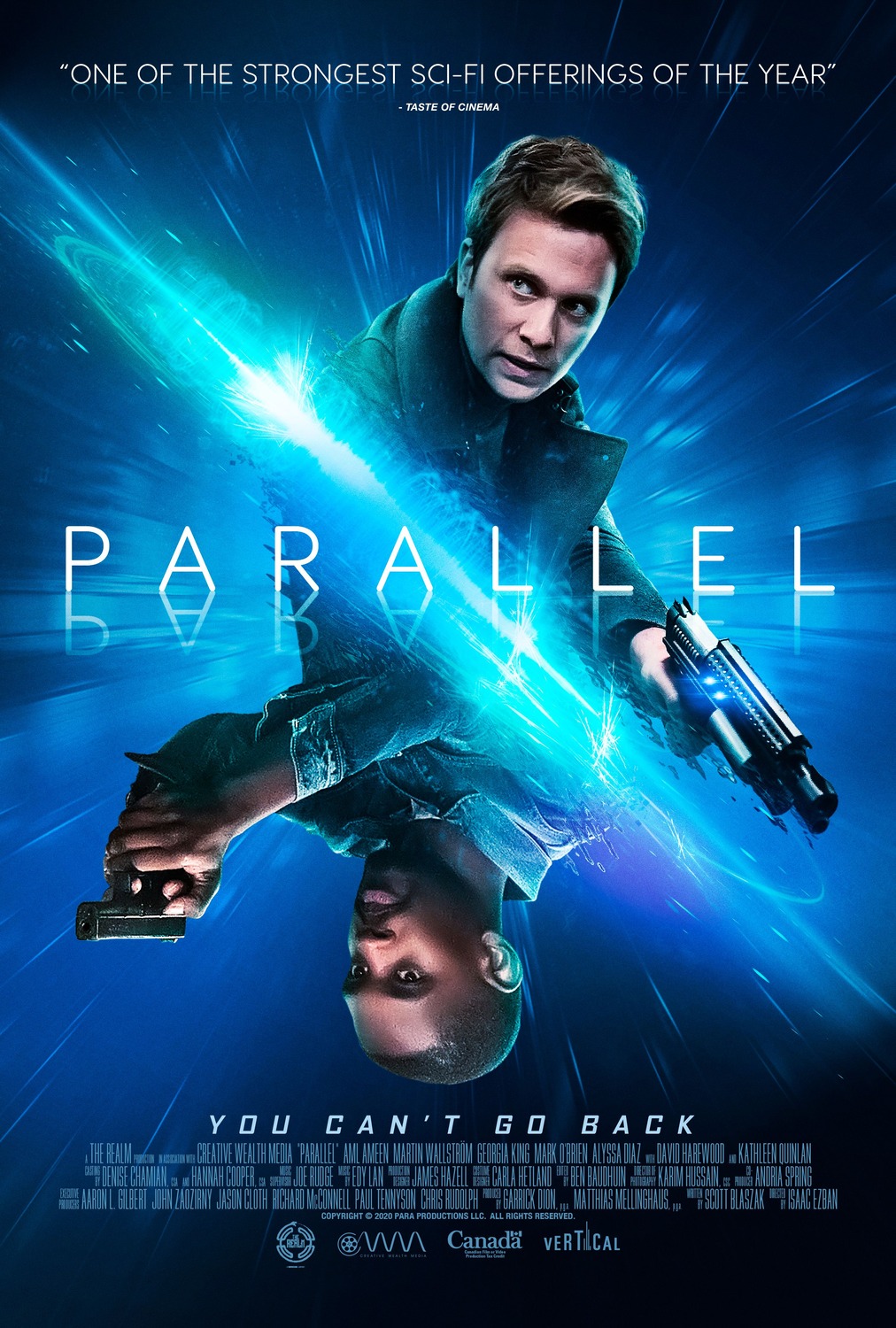 Isaac Ezban’s Parallel begins with a deliciously sinister sequence, in which an upscale home is infiltrated by someone who murders a member of the household and immediately takes on the victim’s identity. My description doesn’t do justice to how effective this opener is. This creepy, glossy prelude ushers in the story of a cluster of affable numbskulls who randomly discover a mirror that acts as a doorway to an alternate universe.

In the kind of attic that could take this story in either Lewis Carroll or H.P. Lovecraft directions (but goes in neither), a mirror that fronts as a Stargate-like portal allows our group of bright but greedy young main characters to enter different timelines and alternate universes. Of course, no one thinks to declare it a scientific breakthrough and, instead, uses it like a supernatural ATM.

A nice touch- walking into the mirror offerings, according to one character, is like “a warm tingle, like when your foot’s asleep.” A chalk board is reliably used to explain the discovered logic of entering an alternative world, in which “one minute here means 30-minutes there,’ or some such nonsense. I went with it and enjoyed myself.

Parallel is uneven but fun, not a sci-fi classic but consistently better and more polished than expected. Tonally, it’s all over the place and doesn’t always balance the dark and light plot turns. Despite a final scene too reminiscent of the fade out in Coherence, it’s nowhere near as good as that film or Primer. Whereas those films were driven by ideas and uncomfortable moral dilemmas, Parallel stays light and loose for most of the way and doesn’t embrace the harder implications of its premise until late in the game.

For a low budget movie, the cinematography and CGI look great. The camera movements are fluid and inventive and there’s also a great score by Edy Lan. The cinematographer loves to zoom in on the actors, who make up an appealing ensemble, even while their characters are, frankly, despicable. This is probably the biggest misstep- I liked these actors but the people they’re playing are nearly impossible to root for. The acting standouts are Georgia Kim as Leena and Aml Ameen as Devin, if only because they bring the most range to their roles.

Initially, this is mostly fun and frivolous, the kind of sci-fi teen movie akin to Project Almanac, where dimension hopping brings out the inner-fratboy in these “scientists.” Seeing them leap carelessly into the mirror and exude a let’s-just-see-what-happens attitude to the scientific method makes them far worse scientists than the victims in Ridley Scott’s Alien prequels.

A nice surprise is how Scott Blaszak’s screenplay becomes quite ambitious in the second act, in which the farcical elements are dialed down, and the concept is finally explored in emotionally rich ways. If the low point is a dumb scene involving dueling mob impressions and a juvenile explosion, then the high point is exploring the ethical question of whether someone deceased in one dimension should exist in another. The climax even offers one of the wilder death scenes of the year. If Parallel closely resembles a season of a Sci-Fi Channel television series compressed down to 103-minutes, it at least will keep you watching and goes down easy. This is a solid guilty pleasure for sci-fi fans and a further reminder that scientific breakthroughs are dangerous in the hands of impetuous children like Marty McFly or these idiots.