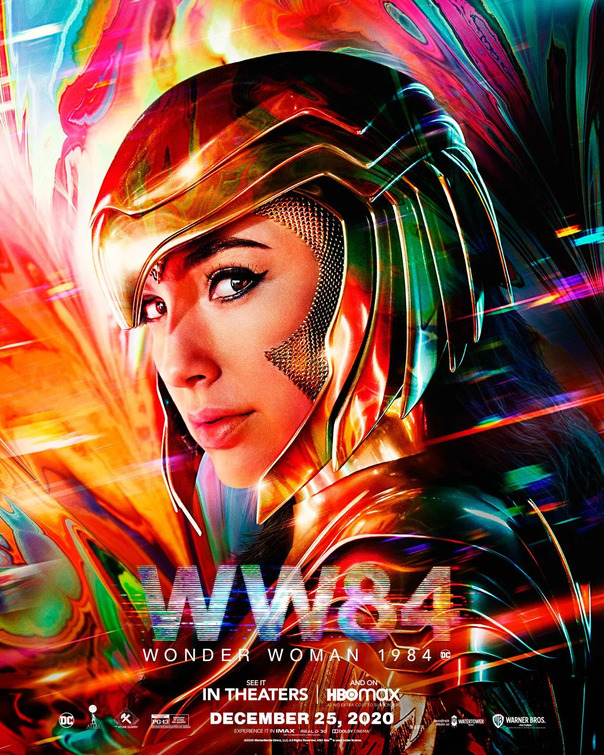 The first problem with Patty Jenkins’ WW84 is the title; at no point is it ever referred to as the far more elegant Wonder Woman 1984, but always WW84, which reads like what you end up with when trying to enter the URL for a George Orwell website. It’s fitting that the title looks like a mistake, as everything here is a botch.

Well, almost everything: Jenkins’ film starts strong, as we witness young Diana Prince, in a flashback, in her Amazon home, competing in their equivalent of the Olympic Games. It’s an exciting, well-staged set piece, full of stirring imagery and cameos from the likes of Robin Wright and Connie Nielsen. The sequence ends with an anti-climax, promising us that Diana will redeem herself and, like Luke Skywalker at the end of Star Wars, lodge the winning javelin through the victory hole (or something). There’s no payoff later on, no follow up with this part of the movie and, once we leave this matriarchal world of Amazonian warrior women, the movie immediately starts to suck.

A set piece in an 80’s shopping mall spells out the trouble ahead- the first Wonder Woman was silly but had a sense of grandeur, ambition and excitement. Here, we have a cornball comic book movie that seems aimed at children (not kids, little children). The screenplay is truly bad and spelling out the details honestly embarrasses me.

Gal Gadot returns as Diana Prince, AKA Wonder Woman, who is still mourning her dead boyfriend from forty years ago. A nerdy klutz of a co-worker (played by Kristin Wiig) obtains an ancient stone that, like Aladdin’s lamp, magically grants your wish. A very Trump-like villain in waiting named Maxwell Lord (played by Pedro Pascal, who plays The Mandolorian in the series of the same name) obtains the stone, starts making all sorts of dastardly wishes, which we know comes true whenever wind wooshes his hair. Also, the magic stone allows Diana’s dead boyfriend, played by Chris Pine, to return in a strange, quasi-necromantic way.

Following a great start, there’s no action for forty minutes. That would be fine, were the plot development not so asinine. The many scenes with Lord being a callous jerk and an insincere TV pitchman with a grander scheme are so broadly played, they never engage emotionally. The same goes for Wiig’s BFF turned villain; Wiig is one of the best performers to ever appear on Saturday Night Live and frequently made dorky, eclectic women hilarious but she’s never funny or even all that vivid here.

Pascal is lousy, Pine looks lost and Gadot once again demonstrates that being good looking isn’t the same as being an actress. I don’t mean to be unkind, as there’s lots of attractive movie stars who can’t act, but she’s one of them. In Gadot’s defense, the script makes a fool of her- note how Diana, mourning how she can’t be with her deceased beau, whines “Why can’t I have this, it’s the only thing I’ve ever wanted!” Are you kidding me? You are an immortal with super- powers who looks like Gal Gadot and you think life is unfair for denying you Chris Pine? Perhaps Diana should turn on her 1984 TV and consider rebound boyfriends, like Richard Gere or Denzel Washington. I mean, I get it- after all, we’re talking about Chris Pratt- I mean, Chris Hemsworth, no…sorry, I mean Chris Pine.

By the third act, WW84 was always a step ahead of me in adding another layer of awfulness:

I assumed, in order to further the failed Trump satire, there would be a White House sequence. Indeed, there is, and it’s a great example of how X2: X-Men United did it so much better seventeen years earlier.

I contemplated how this cinematic lump of coal is at least not as bad as Cats, only to have our hero dressed like Cher during her ’88 concert tour doing battle with a Jellicle Cat.

Once this debacle ended, I sighed with relief that at least Lynda Carter had nothing to do with this, and the movie wouldn’t even let me have that.

The first Wonder Woman ended poorly (that airport tarmac battle with David Thewlis in a Viking helmet is unfortunate) but is otherwise quite good and set up a promising franchise. Movies like this are franchise killers, though it’s so uniquely bad, it makes me forgive the likes of Grease 2 and Speed 2: Cruise Control. The introductory bit, which seems like an outtake from a very different and really fine-looking movie, is the only thing here that works. Otherwise, this is ”-levels of rotten. A year from now, we’re being punished with Justice League: The Snyder Cut and I’m just going to warn everyone ahead of time to bring the nose plugs.