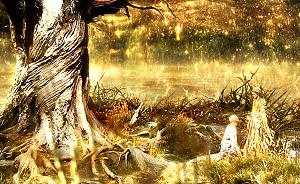 I know that this news is old as dirt, but this story shockingly really hasn’t hit the web yet.  Not only has Darren Aronofsky launched his own site over at darrenaronofsky.com, but he also put up his recorded commentary for The Fountain when he launched the site a couple of weeks ago.

If you love or even admire The Fountain, I’d highly recommend giving it a listen.  I’ve only had the chance to listen to it from work without the movie, but it’s a great listen where Aronofsky doesn’t explain the movie, and that’s something I appreciated.

In related news, Mr. Aronofsky had posted on his MySpace blog at the time of the DVD release that he wasn’t happy with the Warner Brothers release and urged people to e-mail the Criterion Collection and suggest The Fountain as a title to be released by them.  I was able to get ahold of the good folks over at Criterion and they told me there are no current plans to work with Mr. Aronofsky, but to quote the e-mail I recieved, “Who knows what the future holds?”

It’s never been any secret that we are all big fans of Criterion, and I really think that this could be a great partnership.  I’ll second the notion that people suggest The Fountain as a future release.  If you’d like to e-mail Criterion to suggest any films for future release, you can send them a note at suggestions@criterion.com.