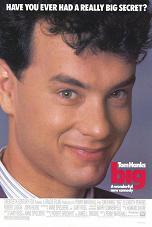 Big is a film that surprised audiences when it premiered 20 years ago and, even today, the movie takes you off guard in unexpected ways.

In 1988, Big was opening at the tail end of a movie year that saw three other films with “body-swapping” gimmicks: Like Father, Like Son (a dreadful farce with Kirk Cameron and Dudley Moore hamming it up), 18 Again! (with George Burns and Charlie Schlatter of tv’s Ferris Bueller), and Vice Versa (a not-bad comedy with Fred Savage and Judge Reinhold giving good performances). Only Like Father, Like Son was a hit (a year later, Dream a Little Dream, with Jason Robards swapping souls with Corey Feldman, saw a mercifully brief run in theaters). The problem with these witless concoctions is they gave older actors an excuse to broadly impersonate a clueless child and young actors an opportunity to broadly mimic adult authority figures. The original Freaky Friday did this better 10 years earlier and all of the four previously mentioned films didn’t look beyond the surface of its gimmick.

The first thing Big does right is that there’s no body-swapping: Josh Baskins is a 12-year boy who wishes he were “big” and finds, the next morning, that his wish came true and that he is now a fully grown adult (played by Tom Hanks). The second thing Big does right is in how Hanks plays the role: he’s not acting like a “kid”, but really portraying an immature 12-year old who has a body language and naivete that is authentically Junior High level. Hanks is brilliant in this, the performance that launched his career past being “that guy from Splash” into grade A projects (though he did pick some dogs, like The Bonfire of the Vanities, after this). Everyone else in the cast is excellent- Elisabeth Perkins, John Heard, Robert Loggia, Jared Rushton, David Moscow and Mercedes Ruehl give performances that compliment a tender, sweet fable about what it genuinely means to grow up. Penny Marshall’s direction is unobtrusive- she lets the performances carry the story, rather than style and directorial flourishes (though the scenes with Zoltar are authentically creepy).

The movie was recently re-released on DVD as Big: Extended Edition. This version adds 20-minutes to the running time (making a 104-minute movie a now 130 minute whopper). The shock is that the longer version is much better movie, a fact I don’t report lightly, as the original version is a four-star movie I have seen many times and find rather perfect. Yet, the new version is better (and both the original and longer versions come in the disc, for those who only want the initial theatrical release). The longer version of Big reveals just how packed, fast-paced and compact the ’88 version is; the longer director’s cut isn’t slower, but has more character building scenes (nothing has been cut out) and moments that not only allow the supporting cast to shine even more but better explanations for some scenes that were sort of vague to begin with. In the ’88 version, Perkins figures out Baskins’ secret by blurting out “I think a kid would…” and, therefore, makes a quick mental connection. The new extension of that scene is even better, as a funny, tell-tale moment where she asks Baskins to buy her gum has a telling punchline. There are also scenes where you learn about the troubled homelife of Baskin’s best friend (played by a scene-stealing Rushton), see more of Baskins bonding with his boss (a never warmer Loggia), more of Baskin’s tender courtship with his too-old-for-him girlfriend (a luminous Perkins) and more small but priceless moments that make the story more complete. This is one of the best Director’s Cut Special Edition DVD’s I’ve ever come across (my only complaint- the original ending, dropped after a test screening, where Perkins “joins” Hanks in returning to childhood, is nowhere to be found and not on this Special Edition).

Remarkably, this movie was declared a “classic” when it first popped up 20 years ago and it still is, but now, it’s even better.

A Low-Res Pic of Our Logo