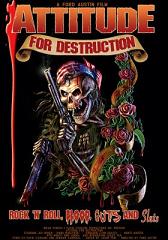 What do you get when you cross a homemade version of Hammer Horror and Peter Cushing Horror of the 70's with the decadent metal of the 80's?  You get Ford Austin's Attitude for Destruction, getting a world premier at Horrorfest next weekend.  If you were to call it a heavy metal That Thing You Do! gone terribly horrific, you wouldn't necessarily be far off.

Starting off with a disturbing human sacrifice, Attitude sets the gore stakes pretty high.  From there, we follow the rise of the band Hollywood Roses.  They're ready to break big, but there's a catch.  They have to dump the founder/front man, Drake (Colby Veil).  Knowing that breaks like this don't come along every day, the remaining four members sign up.  Suffice it to say that Drake doesn't take the news very well.  He tries to kill his one friend in the band, Marc (Simon Burzynski) and everyone else ends pulling him off and killing him.

From there, we pick up a year later and the Roses are exploding, and are living the rock 'n roll lifestyle including the obligatory sex and drugs.  The band is getting ready to go on a national tour when Drake comes back from the dead and starts taking out everyone who's ever wronged him.

Attitude is part of a growing independant horror community.  What was really suprising is that the few tender, dramatic moments really were shot well and really had heart to them.  With this

being an independant film, those looking for Saw or Hostel levels of gore may be disappointed, but those willing to take a chance will find some truly innovative visuals.  It really makes me want to see what Austin could do with a real budget.

Special kudos have to go to Simon Burzynski who played Drake's best friend in life, Marc.  Honestly, his character probably has the most development and he really plays the part of a man haunted by his past actions well.

The soundtrack also has to be mentioned as well.  The metal/hardcore elements of the soundtrack were put to great use, but what threw me off (in a very good way) is a scene where music mogal J.J. (Jed Rowen) is putting down a really nice blues riff on an accoustic guitar.  Austin really took a big chance in that such a change could pull the audience out of the movie, but it was used to great effect and really fun to watch.  Colby Veil's voice appears on much of the soundtrack, and he's definitely got a great voice that fits the film perfectly.

When it comes down to it, Attitude For Destruction is a fun homage to bloody horror of a past time.  Those going to Horrorfest will be doing themselves a favor to check this flick out.  One of the best things about watching all kinds of independant film is finding talented people on the rise.  I look forward to seeing Ford Austin's future work in a big way.  I was really suprised by this film just because I tend to be drawn to more cerebral horror, but Attitude really is a fun movie that horror enthusiasts need to check out.

Starfest Goers: Win A Copy Of Serenity and Get It Signed By Adam Baldwin!