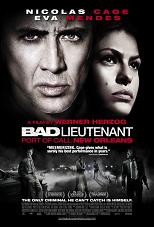 I’m going to say it right here and now:  Bad Lieutenant: Port of Call New Orleans is going to BOMB at the box office.  This isn’t because it’s a bad movie.  Nothing could be further from the truth.  The fact is that Bad Lieutenant is TOO good a movie.  The American movie audience doesn’t derserve this surreal masterpiece, and they’re going to turn their backs on it because it’s too wierd.  I had not idea what to expect going into this film, but I was open to whatever ride it was going to take me on.  Nothing could have prepared me for the glory I was in for.

The film tells the story of Lieutenant Terence McDonagh (Nicolas Cage), a cop in New Orleans.  He can be a mean SOB, but he’s a pretty decent guy at heart.  He injures his back when jumping into a cesspool of water trying to save a convict from drowning in his cell during Katrina.  The drugs his doctor gives him aren’t working anymore, so he ends up moving up to more powerful stuff, namely cocaine.  From there this movie takes you all kinds of places that I don’t want to ruin.  I don’t want to take away from the fun of this ride.  What happens when he sniffs something that isn’t cocaine and it’s results are worth the price of admission alone.  Souls dancing and lucky crack pipes are only a taste of what you’re in for.

After this movie, I completely forgive Nicolas Cage for Ghost Rider.  The fact is, without that steaming pile of a movie, I don’t think he would have given this performance.  The moments in Ghost Rider where he goes insane with glee as he’s transforming into the Rider are present here.  The difference is that it makes sense in Bad Lieutenant.  I guess what I’m saying is that if Johnny Blaze was on coke, Ghost Rider would have been a FAR better movie.  Seriously, though, Cage plays this character perfectly.  When Terry has to be calm and collected, he is.  When he needs to be stark raving nuts, Cage absolutely cuts loose.  Eva Mendes, Jennifer Coolidge, Tom Bower, Xzibit and Val Kilmer all put in great performances, but the success or failure of this film rests on Cage’s shoulders, and he performs wonderfully.

Kudos have to also go out to director Werner Herzog.  Taking on this film had to be a challenge.  The film is already odd enough in the first hour, but surreal/absurd turn it takes in the second half had to be handled very delicately.  It would have been very easy to turn on this movie because of just how out there it gets.  Herzog found a way to make it all work, though.  He found a way to show the humor in all of Cage’s druggie friends cleaning up, leaving him nobody to get high with.  The end of the film is so absurd that I’m pretty sure I would have written the film off completely if Herzog hadn’t convinced me to go along with the ride.  After seeing this and Rescue Dawn, I must now go put every Herzog film I can find into my Netflix queue.  The very title of the film should tip you off.

Here’s the thing about Bad Lieutenant: Port of Call New Orleans, this movie is for movie geeks like us.  I talked with Elisabeth Rappe about this and she couldn’t wait to see it based on the wild trailer and just how long the title is…and the colon.  It’s a tipoff that you’re in for one strange movie.  Most American audience members go to the movies to swith their brains off and be entertained.  Those people are going to be miserable watching this film.  If you’re a little more adventurous and want to be engaged while watching a movie, I can’t recommend this film enough.  It’s wrong, it’s vile and it made me laugh harder than I have in a long time.