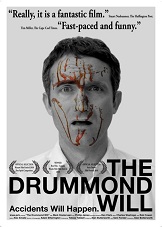 It’s worth noting up front that I’m a sucker for a good British comedy. There’s something about the British sensibility that just makes me laugh like crazy when a proper Englishman completely snaps and loses it when he can’t handle the insanity around him anymore. It’s like The Drummond Will was made specifically for me.

The Drummond Will follows brothers Marcus (Mark Oosterveen) and Danny (Phillip James) as they make their way to their father’s final resting place upon the news of his death. More like The Odd Couple than actual family, the brothers spend plan to spend the weekend at the one thing left to them, their father’s house. After the funeral, they go back to their newly inherited house to find it broken into and a prowler trying to steal something far more interesting and valuable than the house. What follows is a decent into madness as these two unfortunate men stumble into what is possibly the worst run of bad luck ever inflicted upon two characters. I have to say that it’s a glorious trip the whole way that will definitely keep you guessing where the story is headed next.

The town the brothers find themselves in is stocked full of old geezers waiting to kick off, a sweet bar owner, and odd vicar and an even stranger constable. You never know how someone is going to react to a certain situation. Just know that whatever can happen, will.

Mark Oosterveen brings a prim, proper and uptight feel to Marcus that is truly worthy of a comparison to Tony Randall’s Oscar from the legendary TV show, The Odd Couple. The lazy way to look at Phillip James’ performance as Danny would be to compare him to Russell Brand. This would not be fair, though. James brings an innocence and aloofness to Danny that makes him a unique and lovable character for all his flaws.

Shot in black and white, director Alan Butterworth really gives the film an old time slapstick feel in all the right ways. Yes, the film does get a bit bloddy in spots, but I can only describe it as gross, shocking and hilarious all at once. The black and white cinematography lends itself wonderfully to the dark comedy and suspense to be found in this movie.

Full of snappy dialogue, hairpin turns in the plot, beautiful shots of the town countryside and great performances from all the actors, The Drummond Will is a great dark comedy with a fun British sensibility of timing and humor that entertained me in ways no other comedy has this year. You absolutely must seek this film out and discover the glorious insanity for yourself. You won’t regret it.