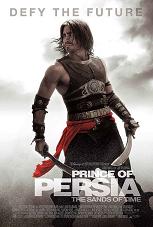 I don’t know what it was about the trailers, but what I saw of Prince of Persia: The Sands of Time just didn’t excite me. Quite frankly, I went into the screening last night thinking about all the other fun things I could be doing with my evening. I had a hard time believing that Jake Gyllenhaal could pull off being an action star and Ben Kingsley has been in some stinkers. This looked like another one. You can never go into a movie without preconceived notions about a film. The important thing is that you have to be open to letting a film happen and take it for what it is. I can’t express how glad I am that I was able to do this because Prince of Persia is an incredibly fun movie.

The story centers around a young street rat name Dastan who catches the eye of the King of Persia with is bravery and character. The king adopts the boy with hopes that this young man will always be a sound advisor when his son eventually becomes king. As someone who can never inherit the throne, the king reasons that the boy will always have what’s right at the heart of his advice. 15 years later, after an interesting turn of events, Dastan (Gyllenhaal) finds himself on the run with a princess (Gemma Arterton) trying to save themselves and all of humanity at the same time.

I could go into great detail about the plot, but the story is really best discovered in the context of the film. This movie isn’t going to change your life. It will, however, make for a great time. Prince of Persia is really a textbook example of a fun summer movie. It has elements Aladdin and the first two Mummy movies thrown together. With a good summer movie, you want a good bit of action with some humor and adventure thrown in. While the film is by no means perfect, Prince of Persia definitely delivers in all of those categories.

My biggest concern going in was if Jake Gyllenhaal would be able to pull off headlining an action vehicle. I love the man’s work, but just didn’t see that working. I’ve never been so glad to be wrong. I completely bought him in the action scenes, which was crucial to my enjoyment of the film. Wisely, the filmmakers decided to give Dastan the sense of humor that was displayed on the first game that appeared on XBox and PS2 instead of making him the brooding hero of later games. This played beautifully to Gyllenhaal’s strengths. It also helped that he developed a genuine chemistry with Gemma Arteron’s Princess Tamina that made for a fun on-screen duo. Add in the ensemble cast that included Ben Kingsley as Dastan’s uncle and Alfred Molina’s conniving Sheik Amar, and you’re just in for a good time.

Let’s get my minor quibbles out of the way now that I’ve talked the film up sufficiently. Yes, everyone in the film has a British accent. Honestly, I got over that pretty quickly. Everyone had a similar accent, so it didn’t feel out of place after about 5 minutes. The only other issue I have with the film is that it seems to run about 15 minutes too long. Tightening up the pacing just a bit would have probably raised the score at least another half point. Let me be clear, though, that the characters are all fun to see and they don’t seem superfluous at all. Finally, some people are going to complain about the ending. If you didn’t see this was coming at least an hour before it happened, though, you’ve got nobody to blame but yourself. It’s not a perfect ending, but it’s completely appropriate to the fun kind of film you’re watching.

Going in to Prince of Persia: The Sands of Time, I was going to be happy if I was able to simply say it wasn’t a complete waste of celluloid. I’m honestly thrilled to report that Disney knew what they were doing when the made this movie. This film pretty much exemplifies the kind of thrill ride you want when you want to catch a fun summer movie. Grab a bag of popcorn, sit down and enjoy the ride. If that’s your goal, I can’t imagine how you could possibly be disappointed.

75 Lost Hollywood Films Have Been Found