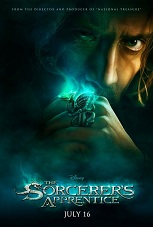 Like was the case with Prince of Persia, I had extremely low expectations for The Sorcerer’s Apprentice. The trailers looked mediocre at best and it seemed that expanding a short sequence from the legendary Fantasia into an almost two hour long movie would be a miserable failure. While it won’t set your world ablaze cinematically speaking, I was pleasantly surprised with how much fun the film was.

Legendary wizard Merlin and his apprentices guard humanity from the evil of Morgana. Horvath (Alfred Molina) becomes entranced with Morgana’s power and joins her in trying to overthrow Merlin. A battle happens and both are imprisoned with another of Merlin’s apprentices, Veronica (Monica Bellucci). Balthazar (Nicolas Cage) is charged with guarding the prison until the perverbial “Chosen One” can be found.

Fast forward a few centuries and we find loveable loser, Dave (Jay Baruchel). He becomes involved with the prison as a young boy and is approached a decade later by Balthazar to help finish the job. Here’s a “gigantic” spoiler, Dave is supposed to be Prime Merlinial. Will they find a way to stop Horvath from unleashing Morgana and an army of the dead? I’m not going to spoil THAT much of the story,

I’m convinced that Alfred Molina is becoming Disney’s secret weapon. He was the most fun as the entrepreneurial sheik in Prince of Persia and he’s absolutely wonderful as the moustache twirling Horvath. In many films, a villain this over the top would be a detriment, but he’s perfect in this film. Nicolas Cage is restrained enough to pull off a mentor quite well while still having fun. Finally, Jay Baruchel can only play the awkward, lovable nerd. In this case, that’s exactly what was needed and he does a fine job.

One of the smartest things done with the film was that the choice was made to essentially have nothing to do with the source material. The Sorcerer’s Apprentice goes the route of being rooted in Arthurian legend, specifically Merlin’s story. By distancing the film from the inspirational source material, you quickly forget that this had anything to do with Fantasia. This was crucial to the film being enjoyable, and they did a great job.

Finally, the film has a good sense of adventure with good special effects. Here’s the one problem with the film. While fun and a bit thrilling, there’s really no sense of danger. It’s the price of making a family-friendly action film. You never really feel much of a sense of danger in the chase scenes, but they are a spectacle that’s fun to watch.

The Sorcerer’s Apprentice is another solid entry by Disney into summer movie fare. It’s a mild action movie, but it’s a fun, summer popcorn movie. You could do FAR worse than catch this on a summer afternoon with a bucket of popcorn and soda with the family. After a long run of bad live-action films, Disney is finally turning the corner and putting out solid, if light, entertainment.