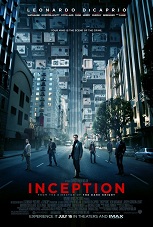 I have to admit I was a bit nervous going into my screening of Inception. There was a similar buzz going into The Dark Knight and the trailers were just as exciting this time around. Unfortunately, I found myself a bit disappointed by the latest Batman flick and I was scared that the same thing would happen with Inception. Good news everyone! Inception is a masterpiece in every sense of the word and is frankly going to be tough to beat this year in my mind as a better film.

The film is based around Cobb (Leonardo DiCaprio), who is a thief whose specialty comes in the form of stealing secrets from people minds in their dreams. He gets an offer he can’t refuse and we’re sent on our way to discover what happened and what shadows lurk in everyone’s mind. Please forgive the vagueness of this plot summary, but I really don’t want to ruin the story for anyone. Actually, anybody who ruins this glorious tapestry deserves to be punched in the throat. THAT’S how good it is.

The entire cast is a treat in this film. While I wouldn’t classify myself as a DiCaprio fan, I can’t help but admire the reckless abandon with which he throws himself into the role of Cobb. Cobb has obvious character traits and subtle ones, and DiCaprio is a master of playing them all perfectly. One thing I absolutely adore about this film is that someone FINALLY cast Ellen Page as something other than a high school girl. While the story is about Cobb, Page’s Ariadne is the emotional center and anchor to the film. She does a spectacular job and keeps you grounded through the whole thing. Seriously, I could go on for pages about Cillian Murphy’s troubled rich boy, Ken Watanabe’s shrewd employer or even how great Michael Caine is in his brief cameo. I would be remiss, though, if I didn’t point out that Joseph Gordon-Levitt’s Arthur steals the show every time he’s on camera, whether he’s trying to talk sense into Cobb or pulling of some insanely awesome fights.

All of this is due in no small part to Christopher Nolan. The man shows time and time again that he’s a master and keeps finding ways to improve. It would have been very easy for the effects to overpower the story, but Nolan keeps everything beautifully in check. Instead of making the created world one filled with pseudo-philosophy like the Matrix movies, Nolan decided to just tell an incredibly solid and engrossing story. It’s easily my favorite Nolan film, and I do like the man’s movies. The artistry on display between the acting, effects and cinematography are astounding.

I also want to make a quick note for those who are worried about having seen the trailers and commercials.  Yes, the visuals in it are amazing, but the best thing is that you have absolutely no idea what the context for what you are seeing.  Once you see the film, those scenes are even cooler.

I promise that you’ll need to see Inception more than once. I also promise that you won’t feel like you missed half the movie after you see it the first time. The friends I went with spent about a half hour after the film just talking about what it meant. I think we all had a pretty good grasp on what happened, but we all can’t wait to see it again to pick up on hints or subplots that we missed. This is the kind of movie that will show you more every time you see it. This summer has been a bit of a disappointment, but Inception completely made the entire year worthwhile by itself.