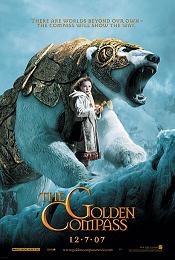 I wasn't the biggest fan of Phillip Pullman's much celebrated “His Dark Materials” trilogy; once the talking warrior bears showed up, I found it became too silly, even for a fantasy. Yet, it had an undeniably engaging story and some rich detail, most of which is lost in the muddled, unappealing film adaptation, which will confuse non-fans and dissapoint the faithful.

As in the novel, we follow a young girl (Dakota Blue Richards) as she foils an assassination attempt on her uncle (Daniel Craig), and grows increasingly more awhere of an enormous conspiracy that may or may not involve the mysterious Miss Coulter (Nicole Kidman). The story heads off in all sorts of directions, which made for a steadily engrossing narrative on the written page, but on screen, the pace is rushed, the editing is choppy and we never spend quality time getting involved with one fantastic episode to the next. It feels like the film is racing to get to the action sequences and is doing so by sacrificing solid character and story developement. I didn't care about any of the people on screen and was stunned to see one sequence after another botched or under-realized.

New Line Cinema also distributed the “Lord of the Rings” series and has made clear from the trailers and promotional items for this film that they intend for audiences to think that “Compass” is of that caliber. Rather, the comparison isn't favorable at all. Peter Jackson's films gave me time to know those characters, to become familiar with the rules of the world they inhabited and to let each important set piece to take the time needed to build suspense and momentum. With “The Golden Compass” (directed by a clearly out of his depth Chris Weitz), the clumsy opening prologue confuses instead of enlightens, the dialogue is mostly exposition-heavy and most of the big scenes feel too short and sanitized (witness a character lose his jaw and not one drop of blood!).

Speaking of being toned down, much has been made of the book's obvious attacks on religion and the Catholic church, but, like everything else here, the scenes in question are silly, have no bite and play like plot filler (you get Derek Jacobi and Christopher Lee looming menacingly but not adding anything to the film overall). None of the film's flaws would be fatal if the actors were magnetic and made us believe in this world, but only Sam Elliot brings the movie temporarily to life whenever he's on screen. Richards displays no warmth or spontonaity in the lead, Craig's heart doesn't seem to be in it and Kidman merely blends in with the special effects and doesn't make the role her own (she and Craig were far better in “The Invasion”).

The films ends before the book does (talk about a cheat!), and it seems unlikely that children or anyone would want more installments from what they get from this movie. On the plus side, the visual effects and production design are impressive, the talking bears are neat, and the little things that come across (like the nature of the “daemons”) are interesting. Yet, “The Golden Compass” isn't dark, heartfelt, intriguing or exciting enough overall and rates as this year's “Eragon”.