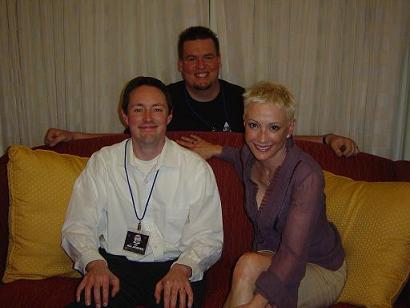 We had the pleasure of speaking with Nana Visitor on Saturday at Starfest.  During our time with her, she revealed that she will be playing Pamela Voorhees in the upcoming Friday the 13th remake.  She apparently won’t be in the film for long, but she has had a mold made of her head.  Yeah…any guesses as to how she leaves the film?

Update:  We now have the audio from our interview with Ms. Visitor.  She talks about Friday the 13th at about the 6:10 mark.

I’ve also added the picture we had with Ms. Visitor.  The bruise at the bridge of her nose is from when they cast the mold, so that must have just been done recently.

We have also added a transcript after the jump.

Barry:  Thank you so much for sitting with me this morning Nana Visitor:  It’s fun to be here.  Thank you. B:  You did a cabaret show at a science fiction convention.  How was that?  What was it like? NV:  (laughs)  How wierd is that?  I know, it’s certainly something different…it’s certainly nothing I ever thought I’d be doing, but…I’m an entertainer.  Ya know?  What are ya gonna do?  If they want to come and sit, I will share what I am and have with them.

Dave:  Did you get a great reaction from the crowd as well? NV:  I did.  You know, there’s a wonderful Stephen Sondheim called “I’m Still Here”, and with huge apologies to Stephen, I re-wrote the lyrics as Kira Nerys, and I think they had as much fun with that as I did. B:  That’s terrific.  It’s great that we get to see so many different sides of you at this convention.  Just to jump around a bit, of the many shows you’ve been on over the years, were there any that you had a guest spot and you just said, “I wish I could have just camped out and become a regular on this particular show”? NV:  Yes, actually.  Battlestar Galactica.  I would’ve set up tent.  I was really impressed with that show.  Another one was, and this was quite a few years ago if you remember a show called Night Court.

B:  Yes NV:  I LOVED being on that show.  That was a grand time. D:  Was it as insane off camera as it was on camera? NV:  When I…this is to be honest, a lot of the people had been there and become stars, and they weren’t too much fun, to tell you the truth.  That was one place where I said, “Ya know what?  If I ever have a show and I have a guest star, I’m gonna be a LOT more careful of how I treat people.  So that was kind of a learning experience, but the creative experience…I mean, those people were great.  They were absolutely great.

B:  Was there a moment when you were on Deep Space Nine and you relized that, “This is the moment where my whole life is going to change”? NV:  You know, it was interesting.  When we did our first press appearance, and we were on the set and we filed out and all of a sudden, there were…it seemed like a million flash bulbs going off, cameras going off and filming.  It was almost oppressive, the attention, and I went, “Oh my god, I’ve never felt this before.  This may be different.” B:  What’s the most bizarre question you’ve ever gotten from a fan at one of these conventions? NV:  Uh, I’ve gotten the most bizarre request.  That’s what I remember.  I was asked to sign a six month old baby.

NV:  Well, it wasn’t on the body, thank god, but it was on the…on the diaper. B:  To switch gears again, what was it like working with Twiggy on “My One and Only”? NV:  She is a lovely lady.  Really wonderful, and she had such a magical quality on stage.  I grew up idolizing her, so I could not believe I was understudying her.  It was quite an experience, although she was shy and didn’t want me watching when they were rehearsing, so that caused some pr

oblems.  I had to do the equivalent of cramming for exams to be able to go on and do the show. B:  Did you have an opportunity to step up to the spotlight?

NV:  I did, quite a few times and it was…any fantasy that you have of Broadway, that was it.  It couldn’t have been more amazing, really.  B:  Dustin Hoffman and a lot of actors have said that the theater is what absolutely revitalizes them.  Do you feel that way? NV:  Theater is church for actors.  It really is.  It’s treated that way.  When I was doing Chicago on Broadway, the stage door person, Rose, did for me what is done for everybody leaving a show.  Once everyone left the theater, she had the ghost light…ya know, the light that you see in the old movies, on the stage and that was the only light, and she left me on stage, and she locked up the theater and let me say goodbye.  And it really is an important exchange.  It really is an important place, and if you’re lucky, God shows up during a performance and you have an amazing exchange with an audience. B:  Do you feel more at home on stage or on film? NV:  Once I’m doing what I do, I’m at home.  It’s just getting there, and with tv, it just takes a lot longer to get there.  There’s a lot of waiting around.

D:  Especially with sci-fi, I’d imagine. NV:  Oh, god yes!  Oh my god, the times…ya know, there were some amazing experiences.  I remember when Odo kind of vaporized himself and it was a scene of Kira and Odo making love in the only way you can make love to someone who liquifies, and it was just me, and the camera was going around and around, and it was maybe slightly disturbing to the crew.  It was very bizarre. B:  To switch gears one more time, you’ve just recently been cast in the new Friday the 13th movie.  Is that correct? NV:  Yes.

B:  You’re playing Pamela Voorhees, the mother of Jason NV:  Yes I am B:  That is amazing! NV:  I’ll be in it just long enough to get decapitated, get my fingers cut off and have him cradling my head.

B:  Oh, my goodness.  How do you prepare for a role like that, or is there a way to prepare for something like that? NV:  The preperation is having plastic poured on your head and getting the mold made, which is not an experience that I would recommend.  Certainly not as a spa treatment.  Especially for a clausterphobic, it is no fun.  So, that’s really the preperation, I would say.  And being kind of insane, that’s not a stretch for me.  That part is not hard. (laughs) B:  Do you like working with makeup or not so much? NV:  Not so much because, again because it’s more time away from me getting to the part that I love.

Starfest Report: WB Panel for Get Smart and Speed Racer