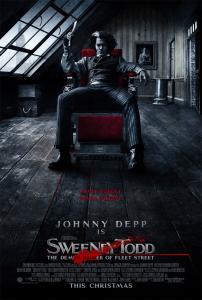 Tim Burton’s marvelous, if too-literal adaptation of Stephen Sondheim’s classic Broadway musical of the same name is truly in a class by itself. As it was on stage, the story follows a psychopathic, murderous barber (Johnny Depp) as he teams up with a ghastly baker (Helena Bonham Carter) to partake on a mission of revenge against a perverted judge (Alan Rickman) who wronged him years ago; however, the barber’s target expands to all of mankind, as he and the baker concoct a scheme that, for starters, involves murder, deceit and cannibalism. While there have been movie musicals as comically gory (“Little Shop of Horrors”) or bleak and harrowing (“Dancer in the Dark”), no film has ever taken the notion of “black comedy/musical/horror” as far as this one does. The violence was easier to take on stage, as theatrical trickery (which added to the humorous, downright campy tone) is tossed aside for bloodletting on a “Kill Bill” scale. The vividness of the gore mutes some of the humor, and many won’t have the gag reflex to last the whole film. At one point, early into the film, my wife turned to me and asked, “Why are you laughing?!” My answer: “It’s funny!” Truly, even if you’re a die-hard fan of Depp, Burton or musicals, this one’s not for everyone.

In fact, some may prefer the Broadway version, which will inevitably be compared to the film, as it was a celebrated production (starring Len Cariou and Angela Lansbury) and is available on DVD for scrutiny. To briefly evaluate the two against one another, I’ll note that Lansbury was hilarious, while Carter underplays her role with sly, deadpan approach (the verdict- Lansbury was funnier) and the best thing about John Logan’s adaptation of the stage show is how he sticks to the previously established story and didn’t expand or bloat it with back-story (as in the uneven film version of Andrew Lloyd Webber’s “The Phantom of the Opera”). Burton mostly confines the action to the barber’s diabolical chair and the rooms that surround it, which is faithful to the show, though it confines the film and never gives it the sweep of other, recent musicals. Overall, longtime fans of the show will likely be pleased with the respect and rather faithful retelling we get here. Y

how to stop smoking cigarettes

et, with only just a single flashback, we never really know what’s going on in Todd’s head since, as played by Depp, his character is all surface. This is the most internalized, closed-up role Depp has ever played for Burton and, while his work is powerful, we’re never sure just what drives Todd (Is he truly insane? Does he hope to reconcile with his long lost bride? Does he care at all for the clearly interested baker?). Those qualms aside, Depp’s singing voice is one of the great surprises of the movie year- his soft, potent, British-accented vocal work recalls a young David Bowie and he nails every one of Sondheim’s crazy, gorgeous show tunes. Burton nicely replicates the feel of the stage musical (Sondheim’s beautiful, cheerful songs , amusingly sung as a horrifying story unravels), with the dark, color-drenched look of the film brilliantly laid to rest for only one scene, a wonderful fantasy sequence set in a vibrant world that looks like nothing like the dirty, diseased landscape the characters normally inhabit. Carter, and Alan Rickman are effective, but the film is nearly stolen by Sascha Baron Cohen, “Borat” himself, whose hysterical cameo appearance is a comic knockout.

The big story twist at the end doesn’t gain the big emotional reaction it strives for, but the film is flush with extraordinary scenes: see Depp sing a flowery love song while slashing the throats of unsuspecting customers.  Witness Carter as she crushes roaches with a frying pan and adds percussion to her opening number.  Marvel at the strangely poignant sight of blood standing in for tear drops that sprinkle down on the cheek of a lost love like rain drops. Truly, there’s nothing else out there even remotely like this odd but always engaging and stunning film. It’s less stylish but better than “Chicago”, “Dreamgirls” and “The Phantom of the Opera” (which it resembles in superficial ways), but not as moving as “Moulin Rougue” or “Hairspray”.

Only the adventurous would give this a try in a safe, fluffy movie season that includes “Enchanted”, “Alvin and the Chipmunks” and a “National Treasure” sequel, but prudes and the squeamish would be missing out on a truly unique experience at the movies. The bottom line is that it’s not perfect but Depp’s singing, Sondheim’s wonderful music, and a compelling story (backed by a remarkable production) makes this one of the fall’s must- see films.