Our thanks to Ethan for coming through with another great review! 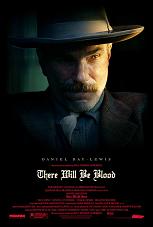 P.T. Anderson's newest film is not an easy one. It cannot be sumarized or simplified into a neat little package. It is a lot to digest on just one viewing. But that's what I love about it. When I see a movie, I WANT to be challenged. I WANT to think. And There Will Be Blood made me proud to be a film geek.

The story centers around a misanthropic oil man known as Daniel Plainview. From the brilliantly executed dialogue free opening, we learn so much about who he is. During the first 1/3 of the film, he seems reasonably relateable and likeable. But you see those little signs in his eyes or facial expressions of a monster. It's not until a certain point in the film in which he talks to his brother, that he outright reveals his true feelings. But Anderson does not lay out a heavy handed characterization at this point for the dumber members of the audience. He uses this to build upon the end, where Plainview becomes a true scoundr

el. And even with an already beautifully written character, Daniel Day Lewis takes it even farther. He truly gives one of the best performances I've ever seen.

And I should mention the conflict of the story. You see, throughout the film Plainview is at odds with a young preacher named Eli Sunday. The foundation of their beliefs are exactly the same. And there is a final showdown that concludes the story beautifully. The theme of capitalism vs. religion is fascinating and wonderfully connects with the human examination aspects of the film. It might seem like I'm summing everything up like I said you can't. But I'm really just analyzing a few aspects of this film. It is one so fantastic and deep that you need to see it for yourself and draw your own conclusions.

And there is one scene I should mention. It involves a derrick fire and is PURE CINEMATIC PERFECTION. The direction, cinematography and music and this scene made my jaw drop and my tears well up.

With dreck like Alvin and The Chipmunks and National Treasure : Book of Secrets polluting the silver screens of North America, There Will Be Blood is a shining beacon of cinematic light.