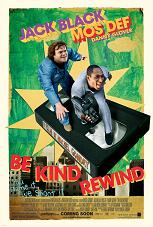 Be Kind Rewind, the latest from the always innovative Michel Gondry, is a terrific film, one of the best of the year and one I hope everyone will see in theaters. The movie has been sold as a one-joke comedy and had a poor opening weekend, which means it will probably be gone from theaters soon. I want to urge everyone interested to see this right now- it’s better than I imagined and quite wonderful.

Jack Black and Mos Def play two longtime friends who work and hang out at the Be Kind Rewind video store, a small, old fashioned VHS rental shop in Passaic New Jersey, owned by an old man (Danny Glover) who is looking to upgrade his business. For reasons too weird to get into, Black’s character becomes magnetized and accidentally erases every video in the store. The solution: make 20-minute versions of the store’s entire catalog (starting with Ghostbusters) from scratch, with $2.00 production values and Black and Def playing the leads.

Here are my sole problems with the movie: a few scenes in the first half are weird for the sake of being weird (like the goofy caps Def and Black wear while eating breakfast), Black is very mannered here (it fits the character, but, if you’re not a fan of his, you may not like his over-the-top performance) and one wacko sequence, involving magnetized urine, is genuinely funny but entirely unnecessary.

What works: practically everything else. The story gets better and better and benefits from being a sweet fantasy about a neighborhood that embraces their long history and pulls together. The Passaic angle is perfect and authentic: my parents were once members to a Passaic store a lot like the one in the movie (where we once rented an under-the-counter copy of the then-unreleased Rocky Horror Picture Show!). The film parodies are hilarious (fans of Ghostbusters are in for a treat and the sequence where the “condescending” Driving Miss Daisy gets recreated is howlingly funny) but the other satirical targets are also sharp. Not only does the film offer a love for the VHS era, but we also get a thinly veiled jab at Blockbuster Video-like mega stores, run by movie know-nothings, that have only two categories, like “Action” and “Comedy”, in the entire store.

All this would mean little if the film weren’t so delightful, original and, in the end, quite moving. Black and Def are a great team, and Glover and Mia Farrow bring a lot of heart to their roles, but the movie is stolen by Melonie Diaz, playing a local girl who becomes a “movie star” overnight. This film is not just about the love of movies but how being in movies and being a part of the filmmaking process brings such genuine joy to people. This is a special film.