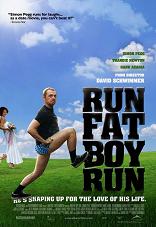 Going into any movie, one can’t help but have pre-conceived ideas.  I had two strong ones going in:  1.)  As has been well documented, I’m a huge Simon Pegg fan.  If he’s in it, I WILL watch it and 2.)  I am really not a Thandie Newton fan.  I’m putting that as diplomatically as I can.  I have yet to see anything of hers that I’ve actually liked.  Add in that this is David Schwimmer’s first feature directorial venture, and this one could have gone either way.  Fortunately, Run Fat Boy Run takes all the clichés of a feel good comedy and makes it feel like it isn’t a retread of forty other movies you’ve seen before.

Dennis (Simon Pegg) isn’t just a loser.  He’s the worst kind of loser.  The guy left his pregnant girlfriend Libby (Thandie Newton) at the altar.  From there, things go downhill for Dennis.  He’s stuck in a dead-end job as a security guard for a high-end lingerie store and he gets no respect.  To be fair, he really hasn’t done anything worthy of respect.  He hasn’t finished a single thing in his life.  The only thing he does right is love his son and try to be a father to him.  Five years after leaving her at the altar, Libby has a new man in her life named Whit (Hank Azaria).  Whit is an American living in London who really seems to be the perfect man.  He’s a nice guy.  He runs marathons for charity and he really has a good relationship with Dennis’ son Jake (Matthew Fenton).  When it becomes apparent where their relationship is headed, Dennis has to make a last ditch effort to win Libby back and decides that running a marathon will do the trick.  Will Dennis win Libby back?  Will he finally finish something for once in his life?  Do you really have to wonder the answers to these questions?

This film really was a tricky proposition.  This really is the first time that Simon Pegg has been in what would be considered a formulaic comedy.  After seeing the credits, I understood why he worked so well in it.  The script that he and Ian Michael Black (Reno 911, The State) wrote have both of their senses of humor throughout, and that is a beautiful thing.  Pegg puts himself in some awfully embarrassing situations (store mannequin comes to mind) and just owns all of these scenes.  It helps when you write it.  You tend to be more willing to make an idiot of yourself.  This isn’t the first time, or the last, that Pegg has made a genre-bending film.  Ok, everything he’s written and bended the genre from Spaced to Shaun of the Dead and now to Run Fat Boy Run.  The thing that keeps this film on track and so likeable is that Black and Pegg stayed true to the sweet center that a romantic comedy needs while still staying true to themselves.

Simon Pegg wasn’t just the funny user with a great sense of comedic timing who we have come to expect.  This movie would not have worked if he couldn’t make Dennis a guy struggling through life, but making his son his priority.  His chemistry with Matthew Fenton was truly heartfelt and grabs you on an emotional level.  Hank Azaria was absolutely great as the guy you really don’t want to root against because he really seems to be a decent guy.  It would be easy to make this an over-the-top evil rival role, but Azaria really brought a subtlety, decency and humanity to the role of Whit.  Dylan Moran was awesome as Dennis’ best friend Gordon.  He’s a compulsive gambler and is a bit of a slime, but he’s a loyal slime you can’t help but like.  Lastly, I can now call myself a fan of Thandie Newton.  She fit in perfectly with everyone else in this film and felt like a real person truly struggling with having to choose between the father of her child and a good man who loves her and is successful.

Finally, David Schwimmer did a great job in his first full-length feature debut.  He probably could have let this film go on autopilot and it would have been an ok movie.  However, the film kept a brisk pace and he kept every single performance at the same high level.  The marathon sequences could have been done from a distance with a crane shot, but the marathon felt like you were in with Pegg and Azaria in the midst of the action, which was crucial to the film.  The success of Friends actors after the show ended has been shaky at best sometimes, but I definitely look forward to seeing what else he comes up with and is now definitely on my list of directors to watch.

This paragraph is going to be short, but I do have to voice my one complaint.  It’s not even necessarily with this movie, but with adult comedies today in general.  It seems that every comedy has to have a gross-out joke.  I know that Judd Apatow has really brought this trend back, but they’ve been even showing up in films that really don’t need them like Death At A Funeral and here in Run Fat Boy Run.  Don’t get me wrong, it was REALLY funny, but it did feel a little out of place in this film.

At its core, Run Fat Boy Run is a romantic comedy that actually has heart.  It shows in the performances and direction that there was actual care in the making of this movie.  Audiences know when you’ve made a movie that is just a money grab and was thrown together.  That isn’t the case here.  There are genuine laughs that make the film worth watching all by itself, but there is also a heart to the movie that makes is stick with you after viewing it.  It’s not often that you can honestly recommend a movie as both a guy movie and a great date movie.  Kudos to everyone involved for pulling this off.

No Episode This Weekend

The Dentmobile Makes A Stop In Co. Springs