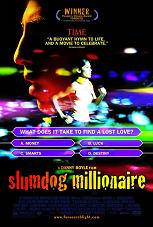 Sometimes, a movie just bludgeons you with its brilliance to the point where you end up sitting dumbstruck in the theater while the end credits role.  It doesn’t happen often, but it happened with Slumdog Millionaire.  I think that when you have this kind of experience, it’s important to gain the perspective a couple days gives before writing a review.  So, here I am, two days after having seen it, and Danny Boyle’s Slumdog Millionaire is just as brilliant a film as when I saw it on Monday night.  As of right now, I can honestly say I can’t think of a single film I liked more than this that I’ve seen in 2008.

Jamal Malik (Dev Patel), a tea boy for an Indian call center, finds himself on the Hindi version of Who Wants to be A Millionaire? and takes himself all the way to the final question, but the show ends before it’s asked.  Given his position in life and that he grew up in the slums (hence the title), the showrunner thinks he cheated.  He’s taken into police custody, where he is tortured and questioned.  He’s essentially coerced into admitting he cheated.  What is revealed is that almost every question he is asked has relevance to his life’s story of growing up in the slums with his brother Salim and the girl who would become the love of his life, Latika (Freida Pinto).

I’ll start off with Danny Boyle’s direction, which is fantastic.  I hate to say it, but were this made by an American filmmaker, it’s highly likely that the film would have been transposed to the US, which would have been a huge mistake.  Fortunately, Boyle immersed the film in Indian life and finds a way to make it heartbreaking, fascinating and charming all at the same time.  One thing that a viewer should know going into this:  if you’ve only seen the trailer, you need to know that it’s a bit rough at times.  Boyle understands that in order for there to be human triumph, there have to be human trials as well.  This movie earned its R-rating, but you won’t find anything gratuitous about this movie.

If Danny Boyle deserves credit for bringing us this world, then the actors deserve as much credit for sucking us into that world.  Dev Patel’s perfomance as Jamal could be described as mousy or untrained, except in the moments where emotion or action is called for.  Then, you realize that Jamal is someone unsure of his surroundings and just cautious.  Jamal is also a man of passion, especially when it comes to Latika.  If Freida Pinto didn’t make Latika someone who is more than just a helpless, pitiful woman who couldn’t do anything for herself, this movie would fall apart.  Latika is the victim of some pretty horrific stuff, but she finds hope in Jamal and is willing to act when the opportunity presents itself.

Finally, I’ll talk a little bit about the cultural stuff that comes up in the film.  It’s interesting that the producers/creators of Who Wants to be A Millionaire? would be ok with having their show be used as a device to tell this story, but they probably were tripping over themselves to be a part of this after reading the screenplay.  Also of interesting note is the use of Hindi music, which I usually despise.  Between a combination of better music and the context of that music in the movie, I’m probably going to end up picking up the soundtrack, which is really saying something.

Slumdog Millionaire is a wonderful film that’s all about telling a beautiful story.  The “love conquers all” motif has been done to death, but everyone involved with this film have found a way to breathe new life into it.  It’s a film that definitely has rough moments, but the triumph of humanity is truly glorious.  Generally, movies that are this good have some aspect that would keep me from recommending it to everyone, but that just simply isn’t the case with Slumdog.  This is a great film that I will be telling everyone who will listen to see.

Dave's Review: His Name Was Jason: 30 Years of Friday the 13th