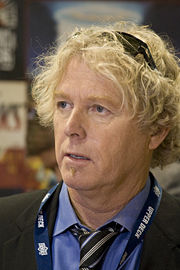 Well, it’s getting to be that time of year again.  I know not a lot of our listeners/readers will be going to StarFest in Denver, but we’re getting excited for the fun to come.  I still have one interview from last year that I’ve been trying to get finished since April, and that’s with the good gentlemen from Random Creatureface Films, but that will hopefully be up this week (along with a DVD review).

Anyway, the first confirmed guest has been announced for this year’s StarFest, and it will make any geek in their 30’s VERY happy and bouncy.  William Katt has most recently been seen in an episode of this season’s Heroes, and he’s known by horror fans for his work in House or Carrie.  The role that most people know him for, though, is as English teacher Ralph Hinkley in The Greatest American Hero.  If you’re a child of the 80’s, you really owe it to yourself to look at his filmography and see everything he’s been in.  Chances are that you’ll probably even remember the episodes Mr. Katt appeared in.  This is one of the great things about the 70’s/80’s.  If there was an actor/actress you loved, chances are they would appear in a bunch of shows.  Mr. Katt just happens to be good in everything he shows up in.

As with last year, just because a guest is confirmed doesn’t mean that we’ll have a chance to sit down with them, but we’ll make every effort to talk to Mr. Katt if his schedule allows.