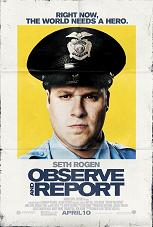 First off, no more “LOL, PAUL BLART 2!!!” jokes. I hate that this sublime work of comic ingenuity is being compared to some fatty falls down-fest that happened to strike a chord with middle-america. What you get here is truly a comedic version of Martin Scorsese’s 1976 classic Taxi Driver. If that doesn’t make you realize how far this goes outside the box, then let me explain it to you.

The character of Ronnie Barnhardt (played by Seth Rogen) is a psychopath. A complete and utter despicable, violent and self-centered man. But he’s also bipolar and has his own dreams. Not to mention that the start of the film is known for being the lovable loser. So do we sympathize with him? The answer to this is a disturbing and reflective gray area. No doubt we’re sickened by his actions, but we can’t help but root for him, right? You see, why we this almost ambiguity is because we see everything through his bipolar-tinged eyes. We experience his highs which consists of going on a date with his crush, violently beating up gangbangers and applying to be a police office. But when he goes to his lows, you can’t help but feel his deep-seethed anger. This is a testament to Rogen’s performance. When he goes to beat up the manager of the Cinnabon for verbally abusing the nice girls who works there, you feel afraid yet happy to unleash a can of whoop-ass. But this isn’t simply manipulation from writer/director/genius Jody Hill, it’s a deep examination of his character.

Observe and Report makes a point similar to last month’s Watchmen. To be a “protector of society” you need to have some motives that reach beyond “helping people”. You have to be an abusive asshole that plays with people. We see Ronnie’s idea of becoming a police office because it will make him feel like a man. His crew follow only to feel a similar high or to exploit their surroundings. Even the probably sanest character in the film, Detective Harrison (played by Ray Liotta) is a man who starts off nice but eventually lets his idea of power to justify tormenting Ronnie for being “lesser” than him.

But where Observe and Report earns its brilliance is in its climax. This is the part of the film that echoes Taxi Driver the most. Ronnie commits an act of such extreme punishment yet is rewarded for it. Because society needs and looks to its disturbed people to protect itself. This is our ultimate punch line, that Ronnie will continue to live his life the way he did before. But now even worse. With more power he has the potential to be an even worse person.

Lastly, kudos to Warner Brothers for being so bold in releasing this, Watchmen and The Dark Knight all within the last year. They’ve shown that they’re a studio with integrity that let actual visionaries make the films they want. No matter how unfriendly they may be to the Paul Blart-crowd. Observe and Report makes us laugh, but it also makes us ponder the ideas of the sad, lonely and dangerous people that walk amongst us.