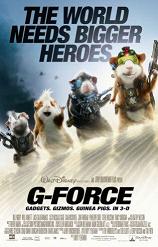 To be honest, I wasn’t really in the frame of mind to give G-Force a fair shot going in. The movie snob in me just KNEW I was going to hate this movie. It was a foregone conclusion that it was going to suck…HARD. It doesn’t help that almost every person I’ve talked to (critic and non-critic alike) has thought that this movie looks idiotic and like a complete waste of time. Fortunately, that was a week or so ago and I’ve since realized how important it is to go into any movie with an open mind. It doesn’t matter if this is a kiddie flick or not, it deserves a fair shot. Imagine my shock and surprise when I came out of the film and realized that I had a good time with G-Force. This movie is proof that Disney, under new leadership, can put out quality family flicks again. It is also proof that Disney has quite the hole to get out of in order to gain audience goodwill back on everything not bearing the Pixar name.

If you’ve seen the trailer, you know the gist of the film. You have a team of specially trained rodents who go on a secret mission and blow it. They get disbanded, but are determined to stick together and save the world. Wow…that may have been one of the shortest plot summaries I’ve EVER written. That’s the beauty of it, though. This movie isn’t setting out to become a masterpiece. It’s setting out to make an entertaining family film worth of the Disney name, and it absolutely succeeds on that level. You can easily figure out who the mastermind is ten minutes into the film, but you don’t mind because you end up having such a good time.

When it comes to the voice acting, everyone is perfectly serviceable. Granted, there is no way that you’ll recognize Nicolas Cage’s voice due to voice modulation.  The few times he’s not an introverted mole, he has as much fun as he was obviously having as Dr. Fu-Man-Chu in Grindhouse. Each actor does a fine job of getting their character across, whether it’s Sam Rockwell as the fearless leader Darwin, Tracy Morgan as comic relief Blaster or Penelope Cruz as girl/martial arts expert Juarez. Honestly, not a lot is asked of them because the film tries to keep the guinea pigs’ bodies realistic as opposed to yoga masters. The true test comes in the live actors. Ok, let’s be honest. Fresh off The Hangover, everyone’s curious to see what in the world Zach Galifianakis is doing in a Disney movie and how he is. In some ways, his character of Ben is Alan’s doppelganger. If Alan didn’t get so screwed up and decided to be a tech nerd working for the FBI, you get Ben. He plays a sweet guy who’s just trying to do the right thing. Will Arnett does great as the jerk FBI agent looking to rise in the ranks. Finally, we have Bill Nighy as Saber. Nighy brings a wonderful sense of dread and cluelessness to Saber that’s just fun to watch.

The screening I saw G-Force at was in 3-D and it bears a special mention here. I was very skeptical of how the 3-D would come off in a live action environment, mostly because everything else I’ve seen in 3-D lately has been animated, whether it be CG or stop motion. I have to say that the effect came off quite well, but it still isn’t perfect. Until we hit the point that you can look at a focused point on the screen and see something out of the corner of your eye without having to refocus, I simply don’t see 3-D as a viable long term format. Don’t get me wrong, there are some great gags that make full use of the 3-D and it definitely lends itself to an extra level of immersion during the chase scenes. It’s fun, but the technology just isn’t quite there yet.

I’d like to take a moment to address everyone being so down on this film. There are two sides to this argument. First, this is a kid’s movie, and a good one at that. It deserves to have a shot with people. At the same time, though, this reputation regarding Disney is well deserved in some ways. With all of the subpar direct-to-DVD sequels have been unleashed on the public of the past ten years or so, Disney is no longer automatically considered a quality product. I’d ask that you remember that there’s been a changing of the guard at Disney, and I’d submit this movie as proof that the train is back on the right track. I know I’m talking up this movie a lot, but I’ve only given it a 7/10. That’s because this movie isn’t meant to be a cinematic achievement. It’s meant to be a return to the fun Disney family films that a lot of us have grown up with. In that regard, this film is a booming success. Yes, that is due, in part, to taking elements from previous Disney/Pixar films. The two most blatant are the evil kid and the mice acting in place of the aliens from Toy Story. You know what? It works. It’s fun. Even better yet, it does combining robots better than Transformers: Revenge of the Fallen.

G-Force may not be appearing on any 10-ten lists at the end of the year, but it’s the kind of entertainment that you can have a good time with if you have a child who wants to see this. It isn’t going to change the world, but chances are that you’ll have a good time and remember what the name Disney is supposed to make you think of. If this is a sign of things to come, I’m very excited to see what the good folks up at the Mouse House have in store for us in the future.