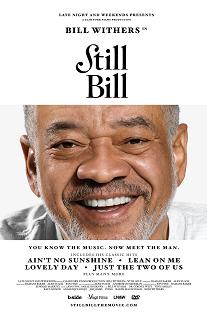 If you’re anything like me, the name Bill Withers doesn’t mean anything to you.  At least, it didn’t before seeing Damani Baker and Alex Vlack’s film, Still Bill.  It was shocking and I’ll admit that I was ashamed for not knowing the name of the man who brought us musical greats like Ain’t No Sunshine and Lean on Me.  Still Bill sets out to change the fact that Bill Withers is an unknown name to most of the country.

What we discover is that the reason we don’t know who Withers is comes as a result of his lifestyle choices.  A man who started out making aircraft toilets, Withers essentially stumbled into the music industry.  Self-confessed as a man who couldn’t really sing, write music, or play an instrument initially, Withers had the sheer raw talent to become a musical force.  A fairly simple man, Withers was perfectly content to go back to living life like he did before music.  He was at the top of the world for awhile, but left under his own terms.

There’s a lot to like in Still Bill.  Withers is so unassuming that it seems like pulling teeth getting him to talk about his career.  Once he starts, though, he’s absolutely captivating as he recounts his amazing story.  Whether he’s talking by himself, or sitting with people like Cornel West (who can’t believe that Withers doesn’t seem to understand his place in music history), you can’t help but be drawn into the conversation and feel like you’re in on the discussion.

The use of music sure doesn’t hurt, either.  Perfectly comfortable standing up for what he believes in, Withers flatly turned down label execs’ calls for adding horns to his music and pressures to have more funk.  Withers knew that his music worked best under a slow burn with grooving bass and amazing beats to go with his voice and arrangements.  With other amazing songs like Grandma’s Hands, Just the Two of Us and Lovely Day, you can’t help but appreciate Withers’ artistry.

All this isn’t to say that there aren’t some problems with the film.  It seems to lose its focus somewhat near the end of the film when talking about Withers’ life now.  While it is a problem, it doesn’t detract significantly from the charm of the film.  It definitely isn’t a dealbreaker or really pull you out of the movie.

Still Bill is a great example of what documentary filmmaking can be.  Not every one has to be about a holocaust of some sort.  Sometimes, the story being told is enjoyable, educational and connects with you on an emotional level.  If you have a chance to catch the film at the Starz Denver Film Festival or set up a screening on your own, Still Bill is well worth your time.

You can find out more information about the film at the official website.

The Upside of Piracy and How Ink Benefited