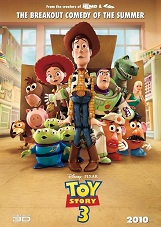 Toy Story 3 is what should be the final chapter in the Toy Story series.  It follows what’s left of our toy friends as they get donated to a daycare and how they try to get home and bond.  I know, that sounds dry and boring.  To me, I thought that was exactly what I was in for, too.  The trailers did absolutely nothing for me and I went into this movie prepared to be let down for the first time.  I tried to work up excitement to see the new Pixar flick and it just didn’t happen.  The only reason I say all this is so you get the full meaning of what I have to say when I tell you that Toy Story 3 is the kind of movie I point to when I want to argue that film is an art form.  It is the essence of film at its most beautiful.  Yeah, that surprised me too.  This might be a long review, so buckle up and get ready for the ride.

I’m going to start with a brief mention of the short accompanying Toy Story 3, Day and Night.  This is the best short that Pixar has put out..  I understand the ramifications of this statement, and I fully stand behind it.  I refuse to spoil the plot, but it’s easily the single best combination of hand drawn 2-D and CG 3-D animation I’ve ever seen.  It’s a beautiful, funny, and thoughtful short.  Seriously, that short was worth the price of admission.  Lucky for us, we get treated to a great film afterword.

I knew I was in for something special with the opening scene of the film.  All I will say is that the film opens with a view of the toys from the mind’s eye of a child.  The scene will be instantly remembered by fans of the series and brings a fresh take on what happens. It’s a glorious scene that lets you know up front that you are in for a special treat that also has its past in mind. We’re then treated to a nice montage of Andy growing up through his mom’s home movies.

After this we move into the toys’ story. Only the main characters remain as Andy gets ready to go off to college. The rest of the toys have all been donated or sold in garage sales. Despite their elaborate plans to lure Andy into playing with them come to naught, and reality sets in. Andy has grown up and just doesn’t play with his toys anymore. After a misunderstanding, the toys end up at Sunnyside Daycare, where they’re sure to be loved and played with forever. Of course, things aren’t what they seem and things go downhill from there. Will the toys escape the grip of screaming toddlers and get back to their home?  It’s a Toy Story movie.  You know what’s going to happen, but the trip is entirely worth it.

I’ll just briefly touch on the voice cast.  Everyone in the returning cast is obviously comfortable with their roles by this third movie and gives you a needed sense of familiarity to buy into the story.  Among the new cast, the standouts are easily Ned Beatty’s Lotso and Michael Keaton’s Ken.  Lotso is definitely a huggy bear that isn’t all he seems and makes for a great foil.  Keaton, on the other hand, has a tough job.  It would have been very easy to play Ken as a gay character, being a girl’s toy who loves living in the dream house and simply adores fashion.  Instead, they made him deeper as a character who is more metrosexual and just wishes the other toys around him would at least try to understand him.  I really appreciated the fact that the writers created a complex character instead of going for the easy joke.

Now, why is this film great with a capital “G”?  Honestly, it begins with the fact that this isn’t a kiddie movie.  Is it a family film?  Absolutely.  It was written with children in mind, but doesn’t talk down to them.  The writers crafted a story that can be enjoyed by every age and enjoyed on a different level depending on how old you are.  Most importantly, the film has heart, and not in a manipulative, cheesy way.  Pixar has spent three films letting you get to know these characters and lets that bond carry you through the film.

Surprisingly, Toy Story 3 has easily the darkest moment that’s occurred in Pixar history.  You know everything’s going to be ok in your brain, but they take you to the freaking brink of destruction and despair before letting you off the hook.  Not only was it intense, it showed just how close these characters have become.

Before you get worried, yes, this movie is also hilarious, filled with adventure and is just fun all the way around.  You’ll get silly jokes, jokes aimed at adults, sight gags for Pixar and Miyazaki fans alike and just crowd pleasing hijinks in general.  What sets it apart, though, is really the ending.

I’m not going to spoil the ending.  It is a perfect ending, though.  It’s heartfelt, wonderful and definitely emotional.  If you cried like a baby at the first 20 minutes of Up, you’ll be tearing up at the end of Toy Story 3 as well.  It’s not a sad ending.  It’s just…beautiful.  It hits every emotional note it needs to and just ends wonderfully.  You get the feeling that this is Pixar saying goodbye to these characters and the final scenes have the love and care that are so very necessary.  I will go on record and say that there can’t be a Toy Story 4 in my opinion.  I know they left themselves an out for the further adventures of Buzz, Woody and the gang, but any more movies will cheapen what is an absolutely perfect cap to a glorious trilogy.

The one thing I will nitpick has absolutely nothing to do with the movie.  It’s all about the 3-D.  I know I’ve come across as a 3-D hater, but I think it definitely has its place.  It just doesn’t really have a place here.  The first problem I have is with the polarized lenses.  Toy Story movies (and Pixar films in general) have always had vibrant colors and a sharp look to the film.  The 3-D mutes that color and softens the picture.  There’s also a problem at various points where the characters look more stop motion and out of The Nightmare Before Christmas than the smooth animation we’ve come to expect from Pixar.  The fact is that the Toy Story universe is so beautifully realized that you already feel like you’re watching 3-D, even in 2-D.  Essentially, I don’t think it’s worth the extra money.

So yeah, this is truly a beautiful film that I would call art from Pixar.  I’m still too close to the film to rank it in Pixar movies or even movies in general, but this film is a classic in every sense of the word.  I didn’t even get into the fact that you don’t have to have ever seen another Toy Story movie to enjoy this one.  It helps, but you won’t be lost if this is your first journey into this universe.  I’m writing this review two days after having seen it and I still feel this strongly about it.