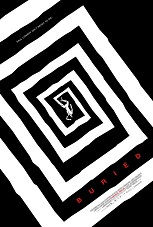 (Ed. note:  By necessity, this review has some spoilers.  Don’t read this review unless you’ve seen the film or don’t mind having plot points revealed to you)

How do you make an interesting movie about a man in a box? You put Ryan Reynolds in that box! This is easily the most inventive movie that I have seen all year, whilst Inception was a wonderful cinematic experience, it did not have all the minimalistic flair that Buried shows. The film is based around Paul Conroy, an American truck driver who has been taken hostage whilst working in Iraq, he wakes up in a wooden coffin buried underground with his kidnappers demanding $5 million by 9pm that night. The film begins in the box, it ends in the box, we never leave the box! It’s amazing how the film never even starts to get boring, you never wish for another location, you are to engrossed in what is happening in this tiny space.

Ryan Reynolds is an actor I have liked for some time now (I consider he and Zac Efron to be the most charming actors on the circuit at the moment), and this is easily his greatest performance so far. It’s quite comparable to Sam Rockwell’s performance in Moon, Reynolds too has nothing to react off from (though I’m sure Rockwell at least got to exchange lines with a stand-in, all Reynolds gets is a phone). It’s interesting because we spend the entire 94 minutes with this man and during that time we really begin to sympathise and care for the character of Paul, so much so that I nearly wept when the character comes to his demise at the end of the movie, I can’t remember the last time a movie effected me so deeply (and no, it wasn’t Marley & Me). Reynolds really goes through the motions in this one, and there is not a moment we don’t believe it, I’d like to think Reynolds will be recognised for his performance come award season, unfortunately I think the reaction will be quite similar to the one Rockwell got.

Another aspect that makes this movie work incredibly well is the direction from Rodrigo Cortés who finds every way possible to shoot inside the box. The shot that stands out the most to me is the one I’m sure you’ve all seen, it’s the last shot in the trailer where the camera pulls back to give us an overhead shot of Paul, this shot display the coffin in an almost grave-like situation, an idea so simple yet so clever, watching it play out, it made me realise the film was absolute genius. Yet whilst being a genius he is very difficult about being one, this film plays so carelessly with our emotions (in a good way), Cortés twists and turns the plot so much making the ending all the more upsetting as we are never truly sure if he is going to save Paul or not. All this, and the director still never takes us out of the box, that’s impressive.

There is a very interesting underlying theme here about the hideousness of bureaucracy. Whilst many reviews that I have read have described this as an anti-war picture, I see it more as an anti corporation flick, it really shows the USA as a large corporation who will do nothing to help Paul in his situation. Quite soon the terror stops being the fear of confinement and starts to become the fear of being put on hold, every time you hear the muzak start playing you nearly want to scream as we all know how frustrating this can be, but clearly it would be worse when you’re buried under ground.

In case you couldn’t tell, I loved this movie; it’s my film of the year so far. Go see it; it has been compared to Hitchcock and that comparison is one the most deserving I’ve ever heard. We so few films like this in the modern age so that when one comes along, it is truly special.