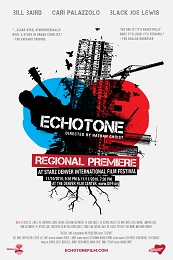 I have a confession to make. Everything I’ve ever seen about Austin, TX makes me want to visit BADLY. Oddly enough, though, I had absolutely no idea that Austin is a city that thrives in music. Thanks to the site that blossomed my love in movies back in the 90’s, Ain’t It Cool News, I’ve always thought Austin was a rockin’ movie town where geeks get together and rebels like Robert Rodriguez have a secret place to make their movies their way. Echotone has shamed me into realizing that Austin is a great music city first, but finds that music at a crossroads.

Since the 60’s, Austin has claimed to be the live music capital of the world. Looking at who all has played there and the sheer variety of artists, they definitely have a legitimate case. The SXSW festival came about from a love of music. That love also translated into a thriving community of eclectic and talented musicians just trying to get their music out to the world.

Like most cities, though, Austin began to grow. Residential development began to encroach on the music scene in Austin and battle lines began to be drawn between two groups. On one side, you have the musicians who are fighting for the right to keep playing all hours in the clubs they’ve always played. On the other side are the unwitting people who moved into condos directly across the street from some of these clubs who are frustrated at not even being able to get a good night’s sleep some nights.

Director Nathan Christ’s film delves into this argument quite interestingly. Using footage taken at what I assume are town halls, he shows the plight of these new Austin residents and lets them vent their frustrations and bring their complaints in their own words. The fact is that this movie belongs to the musicians, though.

Delving into the music history of Austin and exposing the film’s audience to great musicians (signed and unsigned) like Belaire, Bill Baird and Black Joe Lewis, Christ gives you a great history and background of where the Austin music scene has been and where it is now. The fact that these musicians cover a wide array of music and are all incredibly talented will draw you in immediately. Regardless of if you like thrash, indie rock, experimental rock or blues, you’ll find at least one band to gravitate toward.

What is really interesting is that the film doesn’t just follow these bands in their quest to get their music out either by signing with a label or just doing whatever it takes to get it out there. The film looks at their history, how long they’ve been struggling and their thoughts on not only the urban invasion into their community, but a series of honest looks at events like SXSW where bands from all over the world come to play and take over the city. The local artists come off as very honest and disillusioned at times, but never jaded in that edgy way that is so fashionable for smaller bands to act. Every artist is very engaging and you can’t help but root for every one of them to make it big.

Let’s not forget the beautiful cinematography, either. The film just looks gorgeous. Whether in a club watching a band play, various wide shots of the skyline or just a shot of the streets of Austin, Echotone looks great.

In the midst of all the bands, festivals and scenery, Echotone never forgets that there’s an ongoing struggle between the arts and the progress of a growing city.  Introducing you to such wonderful artists is the biggest key to the film’s success.  If you like great music and societal documentaries, it would be very hard for you to go wrong watching Echotone. I actually can’t think of anyone NOT to recommend this movie to. If it comes anywhere near you, definitely check it out.

SDFF 2010 Review: The Drummond Will