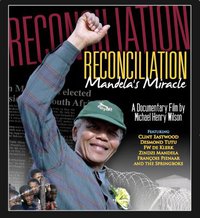 We’re at an interesting point in filmmaking history. We have small enough cameras and high enough definition that filmmakers can now take their cameras with them anywhere in the world and document historical events. Between that and the fact that we mostly live in a global community, we can now get stories straight from the players in major historical events. Reconciliation: Mandela’s Miracle is a beautiful example of being able to talk to the people integral in the ending of apartheid as well as various stars who have a vested interest in the events and are quite engaging.

Director Michael Henry Wilson and his wife Carole took it upon themselves to travel to South Africa and interview key people in the ending of the atrocity known as apartheid. Sitting down with people like Desmond Tutu and FW de Klerk, we get a fascinating look into the way things were before Mandela came to power and exactly what all went into ending it all. We’re treated to interviews with Mandela’s followers who were in prison with him who describe what kind of amazing man Mandela is. We get to hear from Mandela’s daughter, who talks about her father and the fact that she has reconciled the fact that he’ll never be a full-time father, but she is fine with that because of the man he is.

Possibly most interesting is the conversation with the man who was president of South Africa at the time, F.W. de Klerk. He talks about how important it was to him personally for there to be racial unity in the country he loves. This couldn’t be more evident than in footage where he has to sit on the same stage as Nelson Mandela as he berates and chastises the evil things done in the name of apartheid. It was important to have the figurehead of the Anglo side of the country there, take it all on the chin and still be committed to unification.

Finally, the filmmakers were able to sit down and talk with Clint Eastwood on the set of Invictus and talk about Nelson Mandela’s role in unifying the country with a game generally only watched by the country’s white population, Rugby. Through conversations with Eastwood and with actual members from the historic Rugby team, you truly get a sense of just how important it was for that team to succeed and the gestures that the rugby team made to be very inclusive to the country as well.

Interestingly, the Wilson’s were also granted access to the sets of Invictus, where there were able to capture recreations of significant moments that were never caught on film. While on one hand, everything involving Invictus makes me think that this should be an extra on a future home video release, I don’t fault the Wilson’s in the slightest for taking advantage of such a unique opportunity.

The old addage is definitely true. Those who don’t learn from history are doomed to repeat it. It’s incredibly important that we have films like Reconciliation:  Mandela’s Miracle to document not only the horrors of things like Apartheid, but also the solutions that can come about when people are willing to work hard enough. Anybody with even a remote interest in the dark part of South Africa’s history definitely needs to check this film out.

SDFF 2010 Review: The Drummond Will