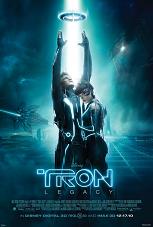 I’ve been waiting 28 years for it to happen, but the day has finally arrived.  Today, Tron finally gets a well-deserved sequel.  Ok, it’s well-deserved in my eyes for certain.  I’ve loved Tron since I was 6 years old.  All the kids in preschool played with the toys and, for a time, Tron toys toppled GI Joe and Transformers as the toys of choice with me and my friends.  I unabashedly love the original film.  I’ve watched it at least a dozen times and I still adore it even with its dated CG and stilted acting from the supporting cast.  There was one thing about Tron that I loved, though.  I couldn’t get enough of the character of Kevin Flynn.  He was a computer hippy who loved computers and video games.  When he got screwed out of the credit for the games he had created, he opened up an arcade.  In short, Kevin Flynn was what every nerdy or geeky male wanted to grow up to be in the 80’s.  I tell you all this to frame just how high my expectations were for the sequel.  I had hoped that Tron Legacy would take everything that was good from the original and amp it up.  I also hoped they would make an incredible story and cast it perfectly to match the updated CG.  In short, I was hoping…no, I was EXPECTING Tron Legacy to be my 2010 movie of the year.  Frankly, it isn’t fair to any movie to put that kind of pressure on a film.  There was no way it was going to live up to the hype I had in my mind.  However, it’s a fine film and a heck of a ride.

In case you haven’t been reading up on the story as religiously as many geeks like me have, Encom CEO Kevin Flynn (Jeff Bridges) has been missing for 20 years.  He promised his son, Sam (Garrett Hedlund), to take him to the arcade the next morning.  He went to his office to work and was never seen again.  Obviously, this messed with Sam.  He hated his father for abandoning him to live with his grandparents, yet he still looked up to him and his ideals.  Over the past 20 years, Encom has essentially turned into Microsoft.  They’re specifically in it for the money and that’s it.  They couldn’t care less about what would make people’s computers run better, the just want to have a permanent and direct line to the consumer’s wallet.  This is perfectly illustrated by describing their newest operation system as being different from the previous iteration because it says 2010 instead of 2009 on it.  After Sam pirates the new OS and publishes it on the web for free, he gets approached by his father’s oldest and closest friend, Alan Bradley (Bruce Boxleitner).  He got a page from his dad’s old arcade that’s been shut down for 20 years.  Sam goes and investigates to see if there’s a trace of his father.  He gets sucked back into the computer world and goes on a quest to find his dad.

I’m going to get the negatives out of the way first before I begin gushing all over this movie.  First and foremost, young Kevin Flynn is a problem.  Using CG, Jeff Bridges was de-aged, and it honestly looks about as good as Patrick Stewart at the end of X-Men Origins:  Wolverine.  Sure, in a still frame, it looks like him.  In motion, though, there’s just something off about the mouth in the way he talks and his eyes.  I applaud Disney for trying to pull this off, but it just doesn’t quite work.  They keep young Flynn mostly in silhouette and shadows, but there’s just no denying that CG isn’t there yet.  At the same time, I had no problem with de-aged Jeff Bridges as Clu.  Clu is a copy of Flynn, so not everything is going to be perfect.  It was still a little distracting, but Bridges performance overshadows any qualms I may have had with Clu.

My other problem is with how the film ends in the computer world.  I refuse to spoil it, but I can tell you three characters that you could pull from Star Wars and drop into Tron because they fit SO perfectly.  Ask me some time and I’ll tell you (it’s different than Jack’s opinion).

Ok, on to the good stuff.  The CG world created in this film has enough of a feel to be connected to the original film while being completely updated.  Since it’s possible to be so much more detailed now than the original film 20 years ago, the computer world is a living, breathing place.  The vehicles look amazing now.  Whether they be light cycles, solar sails, tanks or recognizers, they are all more function and look more realistic while still obviously acknowledging their original designs.  The city and buildings are now fully realized locations.  Instead of being glorified vector graphics on a green screen, the sets are real places (either built or computer generated), and I think that helps the actors be in the moment and adds to the film.

Speaking of the actors, I couldn’t find a weak link among any of them.  I know a lot of people are hating on Garrett Hedlund for whatever reason, but I really had no problem with him.  He plays Sam as both the kid who misses his dad and the man who grew up without a father just fine as far as I’m concerned.  Olivia Wilde easily could have just hung out on screen to be eye candy for the guys as Quorra, but she brought that character to life.  Her performance shows that she understood her character was different from everyone else.  She doesn’t play it up in a big way, either.  She shows the subtlety and restraint that her character needed.  It was great seeing Bruce Boxleitner on screen again.  He played Alan and Tron with the same earnestness that made me enjoy his work so much in the first place.  There’s also a great cameo at the beginning of the film that isn’t even credited that’s fun to see.  It’s nothing on the level of the cameo that happens in Zombieland, but it’s fun to see this actor on screen for such a bit part.

Jeff Bridges is the anchor of this movie and he shows that he’s more than up for the challenge.  Bridges has had a great career since Tron.  I don’t think anybody would have blamed him if he had passed on doing the sequel.  His infectious love of the original is well known, though, and it comes through on screen beautifully.  Starting off as pretty much a Zen master at the beginning, I was concerned that this wasn’t the Kevin Flynn I knew.  Slowly, but surely, though, that chaotic and brilliant man began to show through a little more at a time.  By the time he’s talking about computer jazz, he’s the character I’ve loved for most of my life.  Possibly even more impressive, however, is his turn as Clu.  It would have been very easy to just play Clu as a mirror reflection of Flynn, but Bridges threw himself into the role with equal passion that he brought to Kevin Flynn.  As a result, Clu is a fully formed character whose only flaw is that he can’t expand past his programming.  Sure, you can tell he’s CG, but that performance is all Bridges and you really won’t care about digital defects.

Joseph Kosinski took on a heck of a project when he came on as director for Tron Legacy.  He put his head down and just made the movie he had in mind without any thought to what critical or fanboy opinion might be.  This was most definitely the right move.  The fight choreography is brilliantly shot and the framing and cinematography for the lightcycle battle is beautiful.  What really stands out, though, are the character and exposition moments.  There’s about a 10 minute scene on a solar sail where Bridges and Hedlund are pretty much just standing around and talking.  Instead of being boring or bringing the film to a halt, though, it feels like it belongs there and you get to sit in on a powerful scene between father and son.  The film might be 2 hours and 5 minutes long, but it feels like it’s about 90 minutes.

Finally, I’ve got to mention the score by Daft Punk.  There’s a a reason Disney has been trumpeting the fact that Daft Punk worked on this movie.  If you’ve heard the score, you know just how good it is, but you don’t.  Once you hear the score in the context of the film, you’ll absolutely fall in love.  I sincerely believe this score has every right to be considered and at least nominated for an Oscar.  It’s just that good.

The best thing I can say about Tron Legacy is that Kosinski and the team at Disney didn’t listen to the fanboy reaction or go to the fanboy community for feedback on production.  Far too often, a film’s production team will let the film be dictated by the demands of the fan community.  This often results in a lackluster film with far too many fan references and subpar performances/direction.  The team behind this film came up with a vision they were confident in and they ran with it.  I’m extremely glad they did, too.  With solid acting, amazing visuals and enough subtle shout-outs to the original, I think Tron Legacy is as good as I should have hoped.  I’m very curious to see what they’re going to do with the sequel.