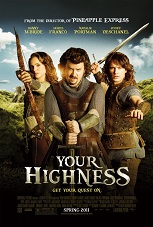 To be straight-up, Your Highness, despite being about what i

s frequently referred to (and played for comedy) as a “quest” is aggressively-episodic and thus feels like a 102-minute sketch. A Saturday Night Live sketch? An In Living Colour sketch? A god forbid it, Cedric The Entertainer Presents sketch? No, the kind of short-form comedy a bunch of friends perform to crack each other up; even if they’re the only ones actually laughing in the very-full high-school auditorium. Being that David Gordon Green, Danny McBride and James Franco are doing this with tens of millions of dollars that could be spent towards I dunno, cancer research or funding like ten Harmony Korine movies, it may seem a little upsetting and somewhat of a waste of time. Truth be told though, despite it not being overtly funny, Your Highness is purely able to float by through its utter eccentricity.

Not as much spoofing as it is lovingly emulating 80’s fantasy “classics” such as Beastmaster and Krull, Your Highness provides the same difficult terrain for David Gordon Green to map his stylistic tendencies on as his last effort, the stoner-film Pineapple Express. That film if anything provided more of a challenge being that producer Judd Apatow had already carved out an auteurship of sorts on his own through his revitalization of the raunch-with-heart subgerne. Green though, with his reliable collaborator, director of photograph Tim Orr, was able to craft a film that bore many of his visual signatures and even with the humour being somewhat less subtle than that of some of his previous films such as George Washington and All The Real Girls, proved that he was someone who could successfully balance the art-house with the mainstream. Now having done two stoner comedies in a row, suspicions have arisen of Green having sold-out, but that is simply not the case. While Your Highness contains very few David Gordon Green-isms (though watch out for a great slow-motion sequence of Danny McBride getting high interspersed with a wedding), there remains artistic credibility in a film that despite homaging shallow popcorn films, remains as far removed from the modern mainstream as possible.

While the film does embrace the use of computer-generated effects, a good portion of the creatures and sets are practical. The scene in which McBride and Franco go to a pot-smoking miniature wizard is funny on its own, but in making it a Jim Henson-esque puppet, the implication of it once molesting James Franco actually becomes far more amusing. Scenes like this, and specifically one involving a Minotaur are not only bucking a trend by being practical, but the pure bizarreness of them only reinforces the idea that nobody else in Hollywood would be doing this. So while Your Highness has none of the introspection, beauty and character-work of his previous films, it at least remains the work of someone thinking about more than pleasing the mall-crowd. The film’s biggest embrace of digital effects is probably the use of blood, which actually works to add comical fakeness, the only thing that probably wouldn’t have been achieved by practical effects. All the sets and costumes though actually feel like they could be a part of a fantasy film, one of the film’s few aesthetic choices that doesn’t inhabit irony. Stuck in between irony and genuine use though is the score by frequent Michael Bay-collaborator Steve Jablonsky, whose often cheap Zimmer-theft makes it confusing whether it’s on the side of the irony of the puppet or the authenticity of Danny McBride’s armour.

To get away from the technical side though, is the film funny? Well…kind of sort of not really but a bit. Almost the entirety of the humour is based on vulgarity of sorts, but this is where it gets interesting. Such as with Danny McBride’s character from Eastbound and Down, Kenny Powers, the joke isn’t as much what foul things he says but THAT he says them. No, just saying “fuck” isn’t funny, but being used by a British-accented Danny McBride as a medieval prince wielding a sword, it is sort of amusing. Your Highness draws frequent attention to all its aforementioned technical choices by making its humour based almost purely on the contrast between it. The supporting cast being full of British characters actors playing it straight such as Toby Jones, Damian Lewis and Charles Dance reflects this entirely. Though, playing it the straightest is Natalie Portman, who you genuinely think could kick ass and gives a surprisingly grounded and driven approach to her character. Compare it to McBride gross-pompousness shtick (funny, but still shtick), Franco’s goofy earnestness and Justin Theroux’s self-aware mugging and it sticks out. Her utter gameness for the material though certainly succeeds in making the film just a little more enjoyable.

While I personally enjoyed Your Highness, I’ll admit to being a part of the film’s completely-niche audience. As said before, Green, McBride and Franco are clearly enjoying this far more than any audience will, but I like to imagine myself on set, laughing along with them at the fact that Danny McBride is wearing a necklace of a Minotaur penis and a studio payed for him to do so.