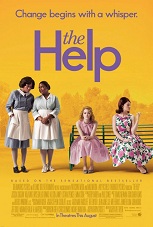 Apparently, The Help is a best-selling book that everybody loves.  Not always do good books translate into good movies.  Ok, let’s be honest.  For every good book-to-movie translation, there are at least a hundred crappy ones.  So is The Help the exception to the rule, or another in a long line of stinkers?  The truth lies somewhere in between.

Taking place at the beginning of the civil rights movement, Skeeter (Emma Stone) is home from college an enlightened young woman with the goal of becoming a journalist.  After landing a gig doing a housekeeping column, she goes to a party being thrown by her old high school friends.  While there, she notices how poorly the titular help are treated.  Moved by the injustice, she decides to write a tell-all book from the help’s perspective.  Will it change the world or get everyone killed?

I’m just going to get the bad part out of the way.  This film most definitely has its heart in the right place.  The setting of the time is dead on accurate and the mentality of people is fairly true to the time.  Unfortunately, The Help commits a crime that keeps it from being great.  The film plays with the time’s rules just a little too much.  While women had the right to vote and were equal in the eyes of the law, the prevailing mentality of the time was that a woman was meant to be a man’s “little woman” and was supposed to stay in the kitchen or at home raising babies.  Anything outside of that would be more than a little frowned upon.  With that in mind, I find it hard to believe that Skeeter wouldn’t be run out of town for being such a free thinker, especially in this town.  Compounding the problem, though, is the publication of the book.  Playing by the film’s rules, the reason nobody talks about it makes enough sense.  However, I’m also fairly certain that there is no way everybody would have gotten away with it completely.  That time period is notorious for people, both black and white, getting beaten to death or within an inch of their lives for daring to even talk about what racial injustice, let alone publishing a book about it.  It’s also important to note that a lot of those lynchings/beatings were never prosecuted.  As soon as thought it put into the plot, it falls apart.

Oddly enough, those gaping logic holes don’t keep it from being a good movie.  The performances in this film are nothing short of outstanding.  Emma Stone continues to show that she’s the real deal.  She makes Skeeter the kind of person you root for.  I understand that this was obviously the goal, but another actress easily could have made her the most annoying and angsty character in the film.  The way she brings a heart to her character on screen is fun to see.  Bryce Dallas Howard takes a departure from most of her previous performances to be the films villain, Hilly Hollbrook.  Her performance is just short of moustache-twirlingly evil, but she becomes a woman you love to hate, and her performance makes her character’s payoff work brilliantly.

I have to point out Jessica Chastain’s performance, though.  Her character is so completely different from the mom in Tree of Life that I didn’t recognize her initially.  Instead of just playing a man-stealing floozy, she brings a depth to her character of Celia Foote that she absolutely steals every scene she appears in.  Between The Help and Tree of Life, it really seems like 2011 has become her coming out party.  I will be keeping an out to catch anything she’s in from this point on.

The biggest thing that The Help needed to do was keep a low profile historically speaking.  The film has heart and wonderful performances, but it gets caught up in its own grandeur and importance.  It’s one thing to make a film about the south during the civl rights movement that talks about small cultural steps that were taken and showing the cruelty that African Americans had to endure.  It’s another thing entirely to create an event that gets fictionalized national attention and make the fact it happens more important than looking at if it’s realistic to the time period in that it could have happened.  I recommend catching the film, even though it’s difficult to categorize.  It isn’t realistic enough to hold up to scrutiny after seeing the film, and it tackles the tough subject matter of the time more than a light comedy would.  The performances alone warrant checking it out, though.  We’ll be hearing about the wonderful performances for the rest of 2011.