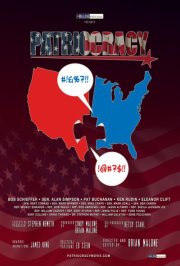 There is no doubt

that the USA is becoming more polarized in terms of politics every day. Every day, we’ve got Republicans blaming Democrats for the state of the economy and Democrats blaming Republicans. Both sides say the other refuses to compromise. In this day and age, who’s at fault? Patriocracy dares to dig into the issue and come back with the truth. Both sides are at fault. That’s easy to say, but how do you show it?

Aside from beginning the film showing what filmmaker Brian Malone credits as the spark of where we find ourselves today (Republican Newt Gingrich taking full advantate of the 24-hour coverage CSPAN brought by calling out his opposition in session), Malone is VERY deliberate in stating his case that our political system has been hijacked by the fringes of both parties as well as professional lobbyists. For every single point or video clip showing a Republican or Democrat undermining the system they’ve sworn to uphold, it is followed by a clip of a member of the opposing idea doing the exact same thing. The entire film refuses to let either party or ideology bask in the other side looking bad. Malone is relentless is proving ad-nauseum that both sides are culpable parties in the corruption of our government.

Not content to just show the corruption of politics, Malone brings in talking heads to further prove his point. CBS News’ Bob Schieffer comes in to talk about how press/media coverage has changed from the objective look at politicians that journalism demanded when he got into the game to the talking head shows found on the likes of Fox News and MSNBC. Politicians and former politicians like Mark Udall, Jim Cooper and Pat Buchannan prove that we have representatives on both sides of the aisle yearning for compromise for the good of the country. People on both sides say that the system has almost been taken hostage by the fringe parts of both parties, with the perverbial silent majority being stuck in the middle.

Add in a look at how busniesses and corporations have injected themselves into the political system, and Patriocracy could be seen as a very depressing film. However, there are two factors that keep this film from becoming a pity party. First of all, the film is incredibly entertaining. Alan Simpson is an absolute riot in the film. His diatribe about things not changing in this country until we raise up in one voice and yell, “BULLSHIT!” is both an anthem of response for the disenfranchised, and downright hilarious.

The second thing done is that the film provides an outline of things that can be done to change the system. While the steps make sense and do provide hope, I almost have to discount the film as a documentary because of this. Even though I am absolutely the target audience for this film and love it unabashedly, a documentary doesn’t do that. A doc may have a certain position on an issue and set about making its case, this film takes that a step further and provides suggestions for actions to actually be taken. I personally don’t have a problem with that, but this film should be considered more of a commentary than a documentary. Some may go as far as to call it propaganda. Honestly, I’d have a hard time arguing that point, even if it’s propaganda for “None of the Above”, to steal a line from Brewster’s Millions.

Patriocracy is a wonderful film that speaks to me on a very basic level as a disillusioned American voter. Pointing the finger at both parties and proving its point exhaustively, the only people who will be able to try and discredit it will be the fringes of both parties, as it makes them look like the selfish children who throw temper tantrums they are. If you are in the same boat as me and don’t see anybody who reflects your values in your government, see this film. You will walk out of it with a sense of hope and be thoroughly entertained.

Tickets can be purchased for the film’s second showing at the Starz Denver Film Festival by going to this link.