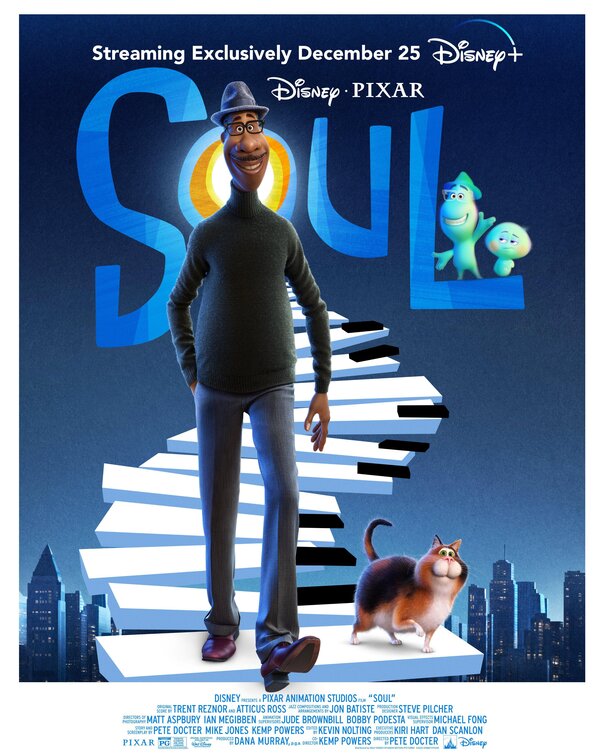 If there’s one thing that Pixar has down pat, it’s making entertaining kids’ movies that have a lot more going on under the surface. Whether it’s therapists using Inside Out to help children identify and cope with their feelings or giving voice to the grief resulting from the loss of a partner in Up, the team at Pixar has made connecting with our humanity an artform in itself. When the announcement came that Soul would be released on Disney+ without the absurd upcharge they pulled with Mulan, there were questions about if this may be the time when the groundbreaking animation house might have finally stumbled and taken on too heady a subject for audiences and if Disney had less than absolute faith in the project. It’s a relief to say we can all exhale and take in a truly special film.

Part time middle school music teacher Joe Gardner (Jaime Foxx) is drifting through life. When the opportunity of a lifetime presents itself giving Joe the chance to finally fulfill his dream of being a professional jazz pianist, everything seems to be going according to plan except for the full time job offer waiting to give him stability instead of the joy of chasing a dream. When life throws him a curveball and sends him to the afterlife, he has to figure out what his true priorities are and if he even wants to come back to his old life.

Jamie Foxx brings a wonderful passion to Joe, whose true love is Jazz while still portraying him as an unmoored soul trying to find his place in the world. Pairing him with Tina Fey’s sarcastically philosophical 22 as a soul with no interest in going to earth because there’s nothing good down there makes for a great juxtaposition that results in great chemistry that grounds the story. Smaller parts like Graham Norton’s Moonwind add a lovely texture to the film, but this is anchored in Foxx and Fey’s performances in a wonderful way.

What really makes Soul work, though, are the character beats the film makes a point to make room for. Instead of just having Joe suffer through being a music teacher in a class full of kids who are either awful or have no interest in being there, it highlights small moments that I would imagine are the times that make teaching so rewarding. 22 getting the full experience of being on earth is SO much more than just showing everyday things and having a character with no experience suddenly experience wonder. It’s the context of those objects and experiences that make for the human experience.

As glowing as I’ve been about the film, it’s also fair to say it might be a bit too adult for kids. However, even if the film doesn’t completely engross kids, it’s still entertaining enough to keep them occupied. When I asked my 7-year old daughter what she thought of the film, she gave it a thumbs middle (as opposed to up or down). While I’m sure not quite what directors Pete Docter and Kemp Powers as well as the Pixar team were hoping for, I’ll honestly take it as I could easily see kids being bored to tears with such grown up ideas.

Special mention has to be made of the theological and metaphysical implications of the story. I’m sure there are some who will dig into what’s being said about the afterlife and others who will be offended that their particular religious belief isn’t on display. To those folks, I say chill out and enjoy the story. The film finds an interesting way to tackle that particularly big idea without actually tackling anything. Those looking for discussions on the level of The Good Place are going to be disappointed as they well should be. It isn’t the point of the film and the topic is given enough thought to create a firm footing for the story without making definitive or grandiose statements about it.

Much like Bill & Ted Face the Music earlier this year, Soul is a wonderfully soothing balm on the dumpster fire that has been 2020. While it’s absolutely fair to say that the third Bill & Ted entry probably wouldn’t garner as much praise had we not been spending 10 months in a living hellscape of reality, Soul is an incredibly solid film that uses elements that would be the central anchor in a lesser film (like the absolutely STELLAR arrangements from Jon Batiste and score by Trent Reznor and Atticus Ross) to weave an elegant tapestry celebrating life and human existence.