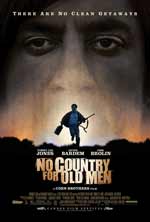 Due to some technical issues (my e-mail freaking out and having to be recreated entirely), this review comes a bit late, and I apologize.  Ethan is back again with a brand new inven…never mind.  Let’s get to his look at the new Coen Brothers film.

No Country For Old Men

I will will start this review with a bold statement : Javier Bardem WILL win a Best Supporting Actor Oscar for this. I guarantee it.

Now onto the movie. No Country For Old Men is brilliant. Freakin’ brilliant. The Coens brothers take what could be an average thriller and turn it into an examination of the moral values and society of this day and age. These aren’t blatantly on the surface. But even if you don’t get the themes, you’ll still probably wind up enjoying the movie. From the masterful suspense and stunning cinematography, No Country For Old Men gets it all right. It also features more humor than I expected. Which is a good thing. It prevents it from getting too bogged down in it’s darkness.

I guess I might be alienating those who haven’t heard of it yet but here’s a brief plot summary. Lewelyn Moss (Josh Brolin) is a hunter who stumbles upon a drug deal done gone bad. There is the usual mess of dead bodies but also something else : 2 million dollars. But of course, as the tagline states, there are no clean getaways. A ruthless killer, Anton Chirguh (Javier Bardem) is sent to retrieve the money. The local sherrif (Tommy Lee Jones) tries to track him down and stop him. What follows in an exciting and bloody game of cat and mouse and the body count goes WAY UP.

As I said before, Javier Bardem STEALS this movie. His character is the most chilling and vile villain since Bill The Butcher. You will have nightmares after seeing this movie. And the rest of the cast does well too. Josh Brolin does a great job as his character gets deeper into trouble. Towards the end Tommy Lee Jones anchors the movie a bit more and does a fine job. It’s his character that sends home the message of the film. And the always great Woody Harrelson provides some good comic relief in his brief screentime. And oh yeah, Milton from Office Space is in it!

I do not recommend this for the faint of heart but any serious film fan NEEDS to see this. You might be frustrated by the ending as I was initially. I was suspecting a big showdown climax but the Coens go for something more subtle and deep. As I thought more about it, I liked it more. The Coens deserve a large round of applause for what they did with this.

NOTE : I did actually give the Coens a large round of applause. They were there in person!