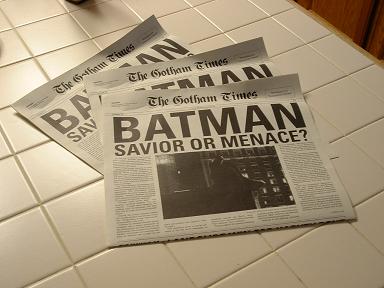 I literally just opened the envelope containing these about five minutes ago, so I haven't had a chance to read it yet, but I'll make a bit of an overview as to the stories in the paper, but we received three copies of Issue #3 of The Gotham Times at SG headquarters today!  No, this isn't for me to gloat…ok, maybe just a little.  Never fear, though, we're going to be distributing two of these copies.  One will be auctioned off this week or next week with 100% of the proceeds going to benefit Child's Play.  As for the other copy, well…we're not sure quite yet.

Edit:  Hit the jump for info as to what's in the issue.  Hit the link above if you want to read for yourself, or I've done a quick rundown on the highlights.

First thing's first:  These papers are written far better than they have any right to be.  These are PR materials, but they're VERY well done.  Kudos have to go out to the Warner Brothers marketing department for sticking to the universe they've created.

Headline – Batman:  Savior Or Menace?
Instead of being a simple op-ed piece about if Batman is good or not, this article goes into the ballot iniative that would have required the Gotham PD to make arresting vigilantes it's lowest priority.  The measure narrowly failed to pass, 49%-51%, despite Batman saving three voters who were being intimidated at the polls.  This really is a great example of the good writing and fun these articles are.

Other Pieces:
-There is an op-ed piece about the Times being proud of endorsing Harvey Dent and that they believe he will usher in a new day for Gotham City, and another urging the Gotham P.D. not to let up on the mob despite mob violence being at record lows.
-Letters to the editor appear discussing various topics ranging from Gotham not being as safe as it used to be, the corruption at Arkham Asylum and urges for facilities to house the homeless.
-Various news bits about the city including an Exhibit about the 1936 World's Fair, the “pothole crisis”, emergency rooms having to close as cases of people exposed to the fear toxin rise and a hot dog vendors strike.
-There is a great piece that is a cool indirect nod to the national rallies held in conjunction with IBelieveInHarveyDent.com
-Finally, there is an article about poisoned cakes and links to organized crime leading to several bakeries being shut down.  This is the closest we get to something the Joker may be associated with other than the mob violence being down.

There are several companies who have ads in this issue, some with websites.  I'm fairly certain that they've all been discovered, but they're still fun to mention.  If the company has a link attached in this issue, I've linked to it in the name of the company.

-Gotham Cable News – GCN – A Comcast Network
I know this site has already been blown wide open, but it's an ad for Gotham Tonight with Mike Engel.  The ad says there will be a new episode weekly.  That might be news to some people

-Gotham Ferries
An ad with a ferry boat at the bottom with the slogan “Don't Miss The Boat!”

-Gotham National Bank (GNB)
A stopwatch showing the time 12 minutes and either 7 or 37 seconds.  Over it is the slogan “What are you waiting for?  Open a Home Equity Line of Credit Today.”

I'm not going to give EVERYTHING away, but this is a pretty good rundown of what's in the issue.  It's extremely cool and worth getting ahold of.

why not try these out