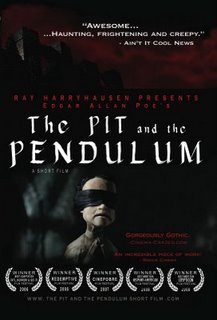 This is director Marc Lougee’s first foray into the beloved masterpieces of Edgar Allan Poe.  It’s a distinct departure in tone from his work on MTV’s Celebrity Deathmatch or even the stop-motion bumpers he did for ABC Saturday morning cartoons during the 80’s.  While fun, it’s very evident that Marc somehow finds a way to step up his game even more when he’s working with material he loves.  While not the entire story of The Pit and the Pendulum, this version creates the world of the story beautifully and makes you empathize with the main character purely with the visual power of this adaptation.  For my money, I’d rather have a stripped down, shortened version of this story than the Corman movie that feels the need to create a backstory rather than just work with the source material.  At a lean, mean 7 minutes (including credits), Pit needs to get moving in a hurry.  Fortunately, it gets the kick it needs beyond visuals by Peter Cugno’s narration and Philip Stanger’s great score.  For more feelings, please read my previous review linked at the beginning of the article.

What I love about Marc is the fact that he doesn’t want to just get all the credit himself.  He has a passion to let the world know about the guys who work behind the scenes.  This is reflected in the fact that the 7 minute short has an hour and 45 minutes of extras, mostly consisting of interviews with the behind-the-scenes guys.  If you’re a stop-motion enthusiast or just a movie geek in general, the special features are worth the price of the DVD by itself.  There is a great interview with the foley sound guys in their sound room where they give examples of how they created various sounds (think the Universal Studios foley demo, but geeked out).  The interview with composer Philip Stranger could have been a fluff piece about “how great it was to work on the movie”.  Instead you get the same energy and excitement from Stranger that you do from every single person involved with this.  It’s very evident that this movie was made with love.  There are also great interviews with the guys from Switch VFX, Lougee himself and much more.  This is the kind of DVD you get when you want to really see what goes into making a movie.

I’ve shown Pit to several friends since I got my copy and everyone has enjoyed it.  The only negative that has been consistant among everyone I’ve talked to is that they all wish it was longer.  I really hope that this DVD release makes Marc enough money that he’ll have the freedom/budget to make The Raven as great as it can be.  For those of you who want more, Marc has just finished work on a comic version of Pit that will go more in-depth on the story and actually use dialogue from the original story.  Priced at $13.99 plus shipping and handling, I have no problems recommending this DVD to anybody who loves movies.

Updated: Go To The Movies With The Stars