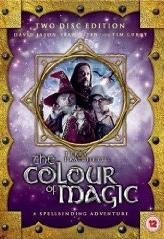 Generally speaking, I try not to talk about DVD releases that the American public at large can’t access because they don’t have a region-free DVD player.  I’m making an exception to that today.  If any of you took my advice and bought/rented Terry Pratchett’s The Hogfather when it hit DVD in North America and were as mesmerized as I was, you’ll be curious to see how the follow-up is and it if it is up to the standard that The Hogfather set.  The short answer is yes, but who wants to read a short answer?  More details can be found after the jump.

The Hogfather set us square in the middle of the Discworld and helped us catch up to what was going on, but we never really got to see the Discworld and what it had to offer.  The Colour of Magic satisfies that curiousity beautifully.  Covering the first two books (The Colour of Magic and The Light Fantastic), Magic serves  as a great introduction to the Discworld.  We start out by seeing a more full vision of Ankh Morpork (where a good chunk of The Hogfather takes place), and this is a fully realized town with commerce going on at the dock and marketplace.

Ankh Morpork is also home to the Unseen University, a school for aspiring wizards.  Rincewind (David Jason), an inept wizard and a coward, has just been tossed out because he can’t perform magic to save his life.  At the same time, the Discworld’s first tourist, Twoflower (Sean Astin), has just arrived at the dock and wants to see the wonders of the continent Ankh Morpork resides on.  Through a set of circumstances, Rincewind is charged with being Twoflower’s guide and protector.  Oh, and did I forget to mention that the world is coming to an end and Rincewind is the key to stopping it all?

To say that there is more to the story than just that would be an understatement, but the discovery is half the fun!  The movie comes with an introduction by Terry Pratchett himself and he does a great job of explaining what you are about to see.  The segment is only about five minutes long, but he does a great job of talking to his longtime readers while not keeping newbies out of the loop.  Pratchett grew up on fantasy and wrote the Discworld books as a bit of a spoof on the Fantasy genre.  I haven’t read the books, but if these movies are any indication, he’s done a fine job.  I’d like to take a moment to clarify what I mean by spoof, though.  I’m not talking Monty Python here.  This is firmly in the same class as Douglas Adams, but making a LITTLE more sense.

I’ll get to the stellar cast shortly, but special note needs to be made of the job director Vadim Jean and the rest of the crew who worked on this for Sky One did.  When most people think of British sci-fi/fantasy, they think of the old school Dr. Who with the cardboard sets and wooden direction.  Throw that idea right out the window.  The writing it excellent and the production values are stellar.  While not on par with a major studio film that would cost $100 million or more, this group took what they had and really made it look awesome.  They way they deal with the existance of Dragons really is magical and fun.

Now, we come to the cast.  The person American audiences would have recognized in The Hogfather probably would have been David Warner and most of the rest of the cast was widely unknown on this side of the pond.  This time around, it’s fairly staggering to see who all is in this fun little fantasy romp.  I loved Ian Richardson’s take on the voice of death, but I’m perfectly fine with Christopher Lee coming on to reprise the role he had in the animated Discworld books.  His banter with David Jason’s Rincewind is really fun.  Brian Cox brought a perfect balance of authority and absurdity to the narration of the film and Jeremy Irons’ cameo as the Ankh Morpork Patrician was just dripping with glorious ruthlessness.  You always know you’re in for a good time when Tim Curry is the villian, and he doesn’t disappoint as Trymon, the exceedingly ambitious wizard at the unseen university.  Finally, we have Sean Astin as Twoflower, the tourist from the other side of the world who simply MUST take a picture of everything.  If you haven’t read the book (like myself), you’ll enjoy his performance as a happy-go-lucky guy out to just have some fun and see some interesting things.  My wife, on the other hand, was a bit disappointed as the character in the books is supposed to be asian and can’t speak English.  Once she got past that fact, though, she enjoyed him as well.

Speaking of the books, I’m sure fans of these works will wonder if they stay true to the original.  Well, the answer is both yes and no.  The first episode covers mostly The Colour of Magic while the second episode is about The Light Fantastic.  Talking with my wife, she said that the first episode covered most of the major plot points of Colour, the second episode does a great job of sticking to the source material in Fantastic.

If you haven’t found me saying anything negative about The Colour of Magic, it’s because I can’t think of anything.  Michelle Dockery’s performance as Susan in The Hogfather had me wanting nothing but movies about her, but The Colour of Magic filled out the Discworld so wonderfully that I can’t wait to visit again and see what they come up with next.  It’s impossible to not remember that this is a spoof of fantasy, so when you see the grand, sweeping shots out of Lord of the Rings, it fits perfectly here.  I haven’t had a chance to look at the second disc of this set, so I’ll be updating the review once I get to dig into those, but it comes with interviews with the cast and author and a set of outtakes.  If you’re going to import this, you might as well fork over the $22 and get the 2-disc edition like I did.  Regardless, whenever this hits stateside, I can’t recommend picking this up highly enough.