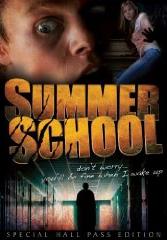 If you were following ScreenGeeks last year when we went to StarFest, you’ll note that we put up a blurb about a great little film we stumbled across called Summer School. I’ve personally had the Extra Credit Edition since then and have been telling everyone I can who will listen that they need to check this film out if at all possible. Well, you can now pick it up on Amazon.com (at the time of this review, it’s on backorder) or rent it on Netflix. The short version is that this little gem from Random Creatureface Films is well worth checking out.

The film centers around Charlie (Simon Wallace), a kid who runs a horror movie website and watches TONS of good and bad horror films. He’s decided to go to summer school to get ahead on classes. Yeah, he’s smart. While waiting for class to start, he keeps falling asleep and we’re treated to homages to several horror genres (slasher movies, vampires, nazis, monsters, satanic cults, and hillbillies). It acts as a great framework for this anthology movie and actually has its own story by the end, so it’s not just a frail framework.

After speaking with the RCF members Mike Nelson, Lance Hendrickson, Troy McCall and Ben Trandem, this was the best possible way these gentlemen could have put this film together. With their initial training in short films, the anthology format really plays well to their strengths and allows them to grow as filmmakers. On one hand, it works great as a demo reel for each filmmaker. The segments, while having their own look and feel, also play well off each other which keeps this feeling like one cohesive film. I’m sure the film could do with maybe a little tightening up, but it’s immensely entertaining just as it is. If you’re a horror fan, whether you like character, gore, monsters or even freaky hillbillies, Summer School has SOMETHING for you.

All of the actors do a great job, but special mention has to be made of Simon Wallace. As the anchor of this film, you have to buy into every single segment, or the film is going to fall flat. Wallace proves himself more than up to the challenge. The gradual realization he brings to Charlie of what’s going on makes every segment fresh and fun. His performance also makes the film’s final payoff work beautifully. Amy Cocchiarella also does a great job as the love interest as she’s required to run the gamut from insecure high school girl to seductress throughout the film. Lance Hendrickson also steps in as best friend Dennis and is the perfect buddy for this film. Like Wallace and Cocchiarella, he’s also required to play his character in several different ways and proves up to the task.

For an independent film release, Summer School is absolutely PACKED with bonus features. The teaser and main trailers can be found, but you’ll also find short films make by Hendrickson, Nelson and Trandem. These are all fun little gems well worth watching. Also included are a Behind The Scenes featurette and deleted scenes. Finally, we also have three commentaries: a crew commentary, cast commentary and a commentary from the RCF crew in general. All of these commentaries are quite conversational and are loaded of information. You definitely won’t be wasting your time checking these out. There are also some really fun easter eggs to be found as well.

For a first feature, the good folks at Random Creatureface Films have set the bar high as far as expectations from them for future films with Summer School. It’s a movie that is genuinely funny, creepy, scary and gory…sometimes all at once. If you’re a horror film fan, just pick it up. You won’t regret it. If you like seeing young filmmakers off to a solid start, do yourself a favor and at least rent it.