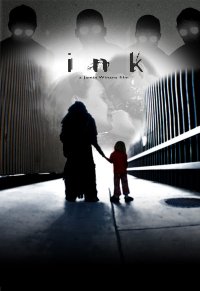 Anyone who reviews movies has had this happen a million times. A friend comes up to you and tells you about the coolest movie ever made, and it happens to have been made locally by this friend’s buddies. Even though you know the movie is going to suck and you’re going to try to find a way to inject Drain-O into your brain to wash out the memory of it, you still humor your friend and suffer through the little atrocity that these people worked so hard on.  Ink is the reason that you sit through all those piles of crap. Once in a great while, you come across a film that is truly something special and sticks with you after seeing it. It’s the kind of movie that makes you believe in the local film scene. When it comes down to it, it’s worth sitting through 100 crappy movies if that 101st movie is something HALF as good as Ink. Here’s the short version of this review: do whatever you have to in order to see this movie. Catch it in Denver, catch it in L.A. if it screens out there, rent it on dvd or just buy it to save yourself some time. 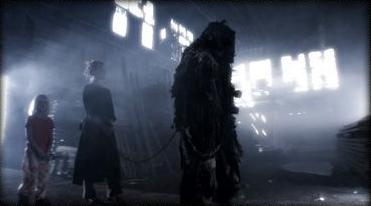 The world of Ink revolves around two sets of people: the group that gives you good dreams and the group that gives you nightmares. It’s a separate dimension from the world we live in, but mirrors our world. One group has the goal of building up humanity, the other with its demoralization. For some reason, an acolyte of the Incubi looking to tear down humanity kidnaps 8 year-old Emma in her sleep, causing her to go into a coma in the real world. The dream-givers try to rescue Emma by trying to get through to her father, John, who is in a downward spiral of depression. What results is a wonderful trip through an ethereal world that sucks you in immediately. To go into further details would be getting into spoiler territory. 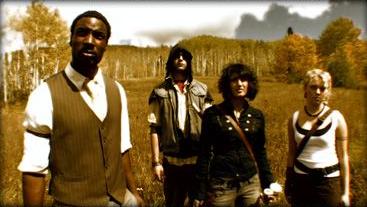 The first thing to notice about the world of Ink is that the film definitely isn’t dialogue-heavy. This isn’t necessarily a bad thing, as long as you can tell the story effectively using visuals. Ladies and gentlemen, I’d like to introduce you to Jamin Winans, the man who has beautifully combined both style and substance. There’s no doubt about the fact that the film is absolutely gorgeous. From the subtle use of filters to show different parts of the dream world, to using the actors’ gestures and mannerisms to tell the story, to the fights, it’s just a beautiful thing to behold. And oh, the fights. As opposed to using a handheld camera so close to the action that you can’t tell what’s going on (like the Bourne films), Winans uses the camera to be close enough to make the fights feel claustrophobic, but far enough out to show off the talents of his stunt team and to show that they actually know what they’re doing. What was really a treat was just how much thought went into how a fight would effect this created world. The first time you see someone crash through a coffee table and roll off, only to have the table reassemble, you’ll know you’re in for a fully realized world.  I would say as a VERY minor criticism that the movie felt like maybe it should have been 5-10 minutes shorter, but I couldn’t tell you where those cuts would be for the life of me.

Sometimes, a filmmaker can have too much control. With Ink, Jamin Winans was the writer, director, composer and editor. I understand this was mostly out of necessity, but Winans has definitely proven that he was up to the task of juggling so many roles. The music is a great compliment to the film, whether it be an emotional scene or fighting sequence that needs more energy. The edits are quick, but not that ADD kind of editing that can give you a headache. It helps that this isn’t his first film, but it would be very easy to drift into self-indulgence when making your own film. Winans doesn’t get anywhere near this territory. 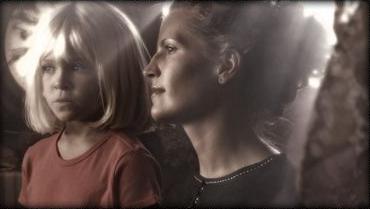 I mentioned that this isn’t a particularly talky film, but the performances were crucial to the success of this film, and everyone came through. Chris Kelly’s John was the epitome of an unhappy person in a self-destructive cycle. He was self-loathing, but had endless love for his daughter, Emma. Speaking of Emma, Quinn Hunchar is a name you’re going to be hearing plenty of times in the future. I’m of the opinion that any girl can play scared, but Hunchar’s Emma is the definition of a spunky girl. Sure, she’s scared when scary things are happening, but she brings the courage and tenacity that Emma needed to make this film work perfectly. Of final note was Jeremy Make’s Jacob. In a film this intense and serious, he brought some much needed comic relief and was a fan favorite at the screening I attended.

Talking with Jamin and producer Kiowa Winans, it sounds like nobody knows what to do with this movie. To put a finer point on it, I’d say that nobody knows what to do with it in the same way that nobody knew quite how to market Pan’s Labyrinth.  Ink is a very unique film and stands as a shining example of why adventurous moviegoers go see such a variety of films. Ink is the kind of film we always hope to stumble across. This is a fairy tale, and a beautiful one. It might be a bit intense for the youngest of viewers.  This is a film that isn’t afraid to scare kids, but pays off with a touching story of redemption. I said it at the beginning of the review, and I’ll say it again: do whatever you have to in order to see this movie. You won’t be disappointed!