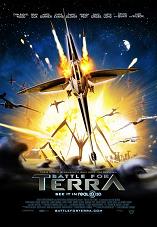 It’s a difficult task, writing a review for Battle for Terra. A lot of people I’ve talked to have said that it just looks like another generic CGI flick with no heart or soul. It looks like a dumbed down kiddie flick that just LOOKS sci-fi. I’m here to set the record straight. Battle for Terra isn’t just a good kids’ film with great 3-D, this is a good movie, period. It has great action, isn’t afraid to have fun, and it tackles some pretty tough issues about what sacrifices are worth making for the future of the human race. This isn’t a propaganda piece against war. This film has more in common with the re-imagining of Battlestar Galactica than it does with Fahrenheit 9/11, unlike what some would lead you to believe. The version of the film I saw was in 3-D, and it really is worth checking out in that format.

The film opens with what is one of the more beautiful credit sequences taking us through space and leading us to the planet we come to know as Terra. It’s a paradise inhabited by a peaceful people who live in a society that crosses a rainforest with Da Vinci-like flying creations out of the Renaissance. We’re introduced to Mala, a spirited girl who is a genius when it comes to engineering and inventions. The people of Terra are in harmony with their surroundings and have a generally peaceful existence. At the same time, the last remnant of humanity is in orbit around Terra, at the end of their rope. Humanity doesn’t have long left to live on their ship, and they’re getting desperate. Orbital scans show that Terra is perfect for human inhabitation, except for a few minor problems, one of them being the Terrians. I’ll leave where the story goes from there for you to discover.

Let’s get the inflammatory stuff out of the way first. There has been some criticism leveled against the film that its message is anti-war. I can see that argument’s point of view only if you see questioning whether a certain kind of military action in a very specific scenario as anti-war. Otherwise, I have no idea what these people are talking about. This film asks what level of action is necessary/acceptable when the fate of the human race is on the line. This is where I may get in trouble comparing Terra to BSG. They aren’t similar in plot or story, but they do raise similar questions. The great thing is that Terra lets the audience decide whether the sacrifices made were worth the final outcome, just like in BSG. You can also ponder what would have happened had things ended differently and whether humanity can truly survive and adjust to either of the possible outcomes. That’s what sets this movie apart from random CGI crapfests. This movie has a brain, and while it certainly will be entertaining to kids, it won’t talk down to them either. Terra believes that kids are smart and can keep up, which is refreshing to an animated film outside of the Pixar world.

The credit must go to director Meni Tsirbas. Tsirbas has created a fully realized world that, while not the most elaborate of CG environments, draws you into itself with a beautiful planet and complex characters. In an interview that will be posted later, Tsirbas told me that the original idea was to make Terra a live-action movie with CG aliens and environments. Due to budgetary constraints, it made more sense to make an animated film instead. If Terra is the result of that kind of thought, more CG films need to be envisioned as live action, then adapted to an animated medium. In a way, Battle for Terra illustrates what’s wrong with most animated films today. Instead of using animation to dump bad stories with no imagination, the story must comes first. I’m sure it helps that Tsirbas has a fairly extensive background in digital effects, so that grounds him in using animation as a tool to fit his story, instead of making the story fit the animation.

I suppose I should also address the use of 3-D in this film at this point. We’re in an odd time when it comes to the use of 3-D. Most 3-D films either go gangbusters with the popout effects and the gimmick of it, or they try to make the 3-D to unintrusive that you think the filmmaker is almost ashamed of its use and make the 3-D experience almost useless. While I’m sure it’s not a perfect happy median, Battle for Terra finds the closest I’ve seen to making use of projectiles come out at the audience while making the screen seem like a stage. This also comes from using 3-D as a tool in Tsirbas’ filmmaker’s toolbox, and I hope it’s a sign of things to come.

Before closing, I’ve got to talk about the voice performances. If you look at the trailer I embedded in this review earlier, you’ll notice quite a few familiar names. With that many names, I’d normally be yelling about this being nothing more than stunt casting. I was absolutely shocked to find that I really couldn’t recognize most of the voices outside of very unique voices like Bryan Cox and sometimes James Garner. Sure, I knew that Evan Rachel Wood did the voice of Mala, but I found myself not remotely caring after about five minutes of the movie. That’s the sign of both a great voice cast and great voice direction.

Were I to make any kind of criticism of the film, it would be the use of the term Terrians for the inhabitants of Terra. I understand that since the beginning of sci-fi literature, Terrans has always referred to humanity. In this case, though, the alternative word is a bit distracting at times. The second criticism that people will have is that the world of Terra could have been more fully realized. Quite frankly, though, I prefer having an intelligent story that is quite thought-provoking to having another cotton candy CGI world that looks pretty and sweet but has absolutely zero substance.

If I’m making Battle for Terra sound heady in its subject matter, that’s because it is. It’s a well written, thoughtful film that will still keep kids entertained and keep their attention. At the same time, I can absolutely see this film drawing a more adult audience. If you’ve got older kids wanting to go to the movies, take them to Battle for Terra. There’s enough sci-fi action to entertain everyone, but there’s also enough story and maturity that you’ll get engrossed in the film, too. I’m willing to bet that you’ll have some very interesting conversations on the drive home from the theater.