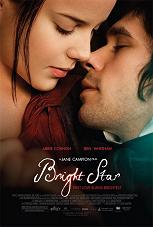 Often the traditional romance is one that relies on a backdrop of epic scale to entertain viewers. Or one that at least depends on pratfalls, wise-cracking best friends and contrived circumstances. And even if you can get past those, are they really about more than lust? Often it seems like romance is just built upon the sex appeal of the stars. We’re forced to believe that these people are really enamored with each other. But Bright Star, the newest film from Jane Campion concerns entirely the idea of longing. And this is where its power comes from. There is not a single sex scenes. Barely even any of the two leads kissing.

But what is done in this film is that we have atmospheric and visual storytelling. I’m a huge fan of this kind of filmmaking. This movie in fact reminds me a lot of Wong Kar Wai’s masterful In The Mood For Love. In that film we had the backdrop of 60’s Hong Kong and an apartment building. In this we have 1800’s England. The story concerns poet John Keats and his love affair with the rather ordinary Fanny Brawne. At first you’d wonder why they’d be attracted to each other. But they have more in common then you would think. They both have passion for the creation of art. On one hand for John it’s poetry. On the other hand for Fanny it’s fashion. But their love is always tested. In that John’s financial situation often leaves him having to go away with his friend Brown to earn money. Usually something like this is a pretty typical romantic plot mechanic to create tension. But in here it’s different. The idea of longing is splendidly realized through beautiful images set to Keats’ poetry. And when John and Fanny are together, it’s not over-the-top love. It’s two young people realizing who they are and being unsure. The performances by Ben Whishaw and Abby Cornish are wonderful in that they feel completely real. Often period pieces have a reputation for being having stuffy characters and performances to reflect the time period. But Campion makes these characters completely relatable.

I will say that Bright Star is a definite slow burn. Even though it seems like I’m jizzing all over it, my patience was a little tested at times. But I appreciate films that take their time to build an atmosphere. I may have wanted things to pick up the pace a few times, but I loved letting the beautiful images and poetry wash over me.

Now the other film…I’ll save that for next week’s podcast.