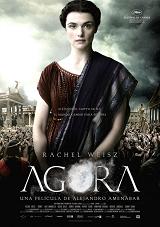 Alejandro Amenbar’s newest film is ridiculously ambitious. It wants to be a beautiful, splendid epic about the effects of fundamentalism. Before the movie started he even said that the film in particular wasn’t against Christianity, it was against violence. And I admire that he tried to do this. All “epic” films should be admired for their scope. But unfortunately, this film falls shorts. When trying to tackle both the ideas of fundamentalist hysteria and “HOLY CRAP THAT’S IT EPIC” I kind of got a feeling. That feeling being that I had seen this all before.

Agora is by no means bad. It’s just that when you see overhead shots of CGI armies storming through an ancient city you think…I’ve seen this before. When you hear this accompanied by the usual James Horner/Hans Zimmer-esque chorus score featuring a woman going “HAYAYEEEHAAHAAHAHAAAAAAAAAHYEEEEEEEEEAAAAAAAAAAHYEEEEE” you think…I’ve seen this before. When you see the characters ruminate on religion you think…I’ve seen this before. Agora tries hard but it just doesn’t try hard enough to be different. It expresses its themes in such a heavy-handed way that lacks any real nuance. As a non-believer I’m all for a film that expresses a secular point of view. And maybe that’s the problem. The director maybe should’ve worried less about trying to go the safe, boring route of “violence is bad”. Maybe he should’ve just made a flat-out “religion is evil” film.

Normally I would try to write more but this movie just doesn’t inspire much.

When I think of the Coen brothers, I think of people that are smarter than me. That have a deep understanding of the world and how it functions. That may make the occasional mysterious and hard to decipher decisions with their films. And their newest, A Serious Man continues that tradition. But oddly enough, something I had always thought of the Coens brothers as was…secular. But this film is clearly a one where God exists. And he doesn’t mind making the lives of his believers hell just to prove a point. In ways this is almost a Jewish retelling of the story of Job but set in mid-1960’s Minnesota.

In ways this is also a companion piece to No Country For Old Men. It depicts a time of change where more-conservative values folks who are getting old cannot keep up. But instead of drug deals, murder and wacky haircuts, it’s kids who swear, steal and don’t respect their elders. Wives who don’t respect traditional family values. College students who don’t work hard and resort to crime. And in the film’s biggest motif, the radical music of Jefferson Airplane (DON’T YOU NEED SOMEBUDDY TAH LUUUUUUUUHVE). At the center of this is Lawrence Gopnik. A college physics professor who you assume before the horrific events of the movie had a decent family life. But throughout the film he keeps getting shit on. So much that it becomes kind of hard to watch. But he keeps his faith as he searches for answers. But is God picking on him? Or is he just over-analyzing everything that’s going with him? Why is this all happening at the same time? Why can’t his pretty-much retarded brother be happy too? Why can’t his son respect him? Why does he eventually have to take care of everything (including paying for the funeral of…well. I don’t want to spoil it).

His brother may struggle in the foreground, but his son in the film provides a lot of the drama. We see even as how he represents the new generation that torments Larry, he faces his own similar problems. How they parallel each other provides most of the dramatic struggle of the film. We come to learn that everybody is having their faith tested. And some may be puzzled by an opening story that on the surface level seems to have nothing to do with the movie. It concerns Russian Jews in the 19th century. But soon in the film Larry says when talking about his physics lectures that he uses fables to help you understand what’s going on. And that’s what the Coen brothers are doing here. They are telling a story that may be hard to deciper, but it all has deep meaning. A lot of it is wrapped up in zany Jewish-caricatures and surreally hilarious dream sequences. Here they are just also helping you understand what Larry is really going through. How every day is a struggle for him. How he needs to be a serious man but he keeps being undermined.

One last thing I want to address is the ending. Just above I was comparing this to No Country For Old Men. And the ending of this is very similar in that it will turn off a lot of the Joe Popcorn-types. They’ll audibly go “that’s it?”. But the ending is perfect. He represents how we never truly have our faith rewarded. That we’re always challenged. The way that A Serious Man unfolds before your eyes is a thing of beauty. Even though at times you’ll want to cover them from being horrified and embarrassed for Larry. But just like him, you’ll be left interpreting everything that’s been surrounding you and what it means.

TIFF Day 1 - The Informant! and Passenger Side

TIFF Day 3 - Bright Star and about half of Valhalla Rising