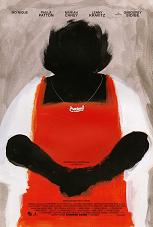 It’s been over a week since I saw Precious, and I’ve been dreading writing this review, frankly.  I honestly don’t know what I think about it.  The film definitely has a lot going for it, but it also has a bit working against it.

Precious follows the excruciating life of Clarice Precious Jones.  She’s dark skinned, obese and just got pregnant with her second child by her father.  That’s just the first 5 minutes of the movie.  Her mom abuses her as well, she’s miserable and only remotely happy when escaping into fantasies when real life is just too much.  Actually, too much might just be the perfect description of Precious.

Let’s talk acting first, though.  Never in my life did I think I would say that Mariah Carey, Lenny Kravitz and Mo’Nique can act…really well.  Credit where credit is due, though.  This trio puts in some truly compelling performances.  Mo’Nique creates what can only be called the ghetto Mommy Dearest.  Kravitz, Carey and Paula Patton all are touching as various points of light in Precious’ life.  Gabourney Sidibe did fine as Precious.

If Lee Daniels is to take partial credit for these great performances, then he must take the blame for the awful fantasy sequences.  There is one fantasy that takes place in black and white that did make me laugh, but the rest of Precious’ fantasies are just bad.  They pulled me completely out of the film and just were put together poorly.

The problem is the fact that this film isn’t based on a single person, at least from the research I’ve done.  I’m sure that she’s an amalgom of people Push author Sapphire came into contact with as a teacher, but there’s really only so much that you can put onto one person.  There have been after school specials that put people through less dramatic problems that Precious does.  In retrospect, I can understand people who have the criticism that Precious is exploitative.  I have no doubt that these problems are very real in urban America.  I’ve learned enough from life to know that I know squat, but this is a bit much.

This brings me to the ending.  If this film was based on a real person, I would be ok with the ending.  To quote Bill Withers in Still Bill, “It’s ok to head out for wonderful, but on your way to wonderful, you’re going to have to pass through alright.  When you get to alright, take a good look around and get used to it cuz that may be as far as you’re gonna go.”  I could handle that kind of ending if it was real life.  To put a character through the closest thing to Hell on Earth, subject them to the ultimate of human trials and not give a decent human triumph really left the film on a down note.  If the goal of this film is to inspire people, you’ve got to give hope.  The end of Precious has no hope as far as I’m concerned.

Precious is probably going to be nominated for Best Picture when Oscar season rolls around.  I wouldn’t even necessarily be shocked to see it win.  There is a powerful message of survival to be found if you dig hard enough.  Ultimately, I found the film to be mostly forgettable, but if it serves to inspire people in a rough place in life, that’s the goal of the movie.  Precious isn’t mean to be a great film, it’s meant to inspire those who need it most.  In that respect, I with the film nothing but the best.