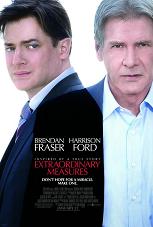 It’s really nice when I get the chance to see a movie that lets me take off my critic’s hat and just enjoy it for what it is. For me, that kind of movie is a true story that’s well made. It isn’t about the “film”, it’s the story that’s important. Extraordinary Measures is exactly that kind of film. I understand people’s trepidation at the commercials that have been airing on CBS seemingly non-stop for the past few months.

The film Extraordinary Measures is the story of John Crowley (Brendan Fraser), a man whose two children have a debilitating genetic disorder called Pompe. As there is no cure or treatment for Pompe, Crowley spends his every waking moment at night night after a full day of work and evenings with his family pouring over medical journals trying to find some hope for his children. In his research, he comes across the promising theories of Dr. Robert Stonehill (Harrison Ford). Crowley goes to great lengths to get in touch with Dr. Stonehill. Once he does, he finds that the good doctor can’t do any lab research because he can’t get the funding. With John’s promise to find funding, the two go on a remarkable journey together that takes them places neither could have expected.

I think most people will agree that they don’t mind a story designed to lift you up and tug at your heartstrings. The problem with smaller productions is that they’re cheesy as all get out. The music is manipulative, there isn’t any kind of direction to speak of and the acting you’re left with belongs on public access TV at best. Let me be very clear. All of those things I just said? Yeah, they don’t apply to Extraordinary Measures.

Let’s start with the direction. It seems very clear that Tom Vaughan didn’t want to make a film that is manipulative or fake in any way. Doing a film of this nature is very tricky and it’s difficult to give a movie like this a natural and real feel so you can come to the characters instead of forcing them on you. Somehow, Vaughan found a way to pull this off. He frames beautiful shots of the Nebraska landscape without getting flashy. If a scene takes place outside a building by open fields, you see the surroundings in all their beauty, but more as a referrence for the setting. It’s subdued enough that I don’t think Vaughan is going to get enough credit, honestly.

Granted, it’s easy to let the camerawork take a backseat when you have great actors and everybody is on the same page. Brendan Fraser finds a way to convey the determination of John Crowley without leaving behind the man who loves his family. Keri Russel is great as Aileen, John’s supportive wife. It seems like Harrison Ford got to have the most fun playing the crotchety Stonehill, but he doesn’t go over the top. What is wonderful about this movie is the fact that it’s very apparent that egos had no place in this project. That factor is what makes this film so enjoyable and touching.

I’d like to take a moment to talk about the truth of the film. In my research in the time since seeing this movie, I’ve come across some people who have called this movie a lie. They’ve said that the breakthroughs are called a cureall when they’re not. Simply put, this isn’t true. I’m not going to spoil the movie, but at no point is any advancement called a cure or even 100% effective. There’s a point made of what advancements that are made being the first step and nowhere near a cure. The film is quite clear that this isn’t the miracle everyone wanted, but it’s a step. With how much anger is pointed at a film that exposed me to a disease I didn’t even know existed a month ago, I just want to make a point of just how honest and fair this movie plays.

Extraordinary Measures is a wonderful and touching film that truly is for the entire family. You can absolutely take grandma to see this or get dragged to it with your parents and you won’t mind coming along. What sets this film apart from the schlock that it will inevitably be unfairly compared to is solid performances, a compelling story and a director with the sense to know when to set and frame the film and when to get out of the way and let his actors work. This movie isn’t going to challenge your cinematic palette, but it’s most certainly not going to offend it, either. To me, this movie is my kind of cinematic comfort food. I’m a sucker for a true story that’s made well, and that’s what we have right here.

Episode 102 - The Hunt for Red October