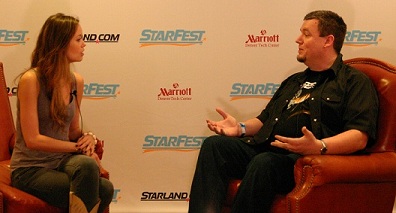 Photo courtesy of Earl Bickel
It’s time to start posting some interviews from last weekend’s Starfest, and I figured I may as well start off with a big one.  I was VERY lucky to be one of two people who had a chance to sit down and talk with one of the sweetest people I’ve ever had the pleasure of sitting down with in Summer Glau.Instead of going into the uber-geeky stuff talking about the actual series’ of Firefly and Terminator:  The Sarah Connor Chronicles, I made the concious decision to talk with Summer about the acting challenges and opportunities both shows presented as well as what kinds of roles she wants to take on in her career.  If you ever get the chance to catch her at a convention, I’d highly recommend doing so.

You’ll be able to hear more about her new upcoming show, The Cape, in the interview she did with Jonja.net when they post it.  It sounds like a fun show.

Sorry for the poor audio quality.  I’ll be exclusively using our podcasting rig for interviews next year.