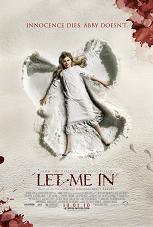 I really liked Let The Right One In, I thought it handled the vampire genre in a new and interesting light and it was easily one of the most chilling films I’ve seen in the last few years. When I heard they were remaking it, I was nonplussed, of course it was going to happen, most popular foreign movies get American remakes (especially horror movies) and I wasn’t really interested until I saw who was involved, I’m pretty much a fan of most the cast and definitely the director (I really liked Cloverfield too) so the film did end up peaking my interest. I wish it hadn’t. The plot follows young, troubled Owen (McPhee) going through the motions in his life, he is bullied, his parents are getting a divorce, his life sucks. Soon he is befriended by Abby (Moretz), a vampire.

The film isn’t bad, Matt Reeves is a very capable director and the two leads are definitely engaging but the biggest problem with it is that I’ve seen it all before and it seemed to be more interesting in Swedish. The biggest problem I ended up having with the film was that it just wasn’t scary enough, I remember leaving the cinema after seeing the original and being truly terrified of the swimming pool scene, here all the subtlety is gone and it feels like a typical action scene, nothing special, nothing unique. I also had a big problem with them showing the brother before the swimming pool scene, am I supposed to believe that this typical brother bully is going to kill Owen? When he shows up in the original we know very little about him and he is quite menacing, far more so than this pretty boy who shows up in the remake. Even the scenes in which Abby kills her victims hold very little scares due to the obvious use of CGI, when is Hollywood going to learn that this isn’t the 80’s, we are not scared of computers anymore! Instead of old-fashioned scares, the film seems to have upped the gore factor, which I feel is a sad analogy for where the horror genre is going.

Matt Reeves definitely tries his hardest, I know it’s been talked to death but the scene with Richard Jenkins in the back of the car is wonderful, it was the one thing I felt was better than the original and it definitely made me want to see more of his work (in fact I’m still open to the idea of Cloverfield: Part Deux) but I feel he was restricting himself here. He has stated many times that this is a new take on the book and not a remake, I don’t believe a word of that, the two films are amazingly similar with great shifts of tone (one being atmospheric and the other not). As usual I found that Ms. Moretz was able to light up the screen, she is a talented actress and is able to convince me that she was far older than her actual age, sadly she does not have that same nearly departed look that Lina Leandersson captured so beautifully in the original.

I realise I have been comparing the film to the original quite a bit and not letting it stand on its own two feet. I feel if I had seen this movie before seeing the original I would have found it to be good but not great, it’s still a very strong story with all the same interesting character dynamics that we know and love but something just feels off. The film never knows if its in horror territory or a coming of age film, it almost feels messy mainly due to the bad CGI and the way the vampire side of Abby is represented. I think the best thing I can say for this film is that hopefully it will make people look for the original (though seeing as it has bombed in the US I highly doubt that will happen).

The film is not the masterpiece that the original was, and I think a lot of us saw it coming. It’s not terrible, it’s not brilliant, it’s just mediocre which is a shame because I can tell that something was fighting to get out of this movie, sadly the filmmakers didn’t work hard enough to translate it to the screen. Give me CGI cats over CGI girls any day.