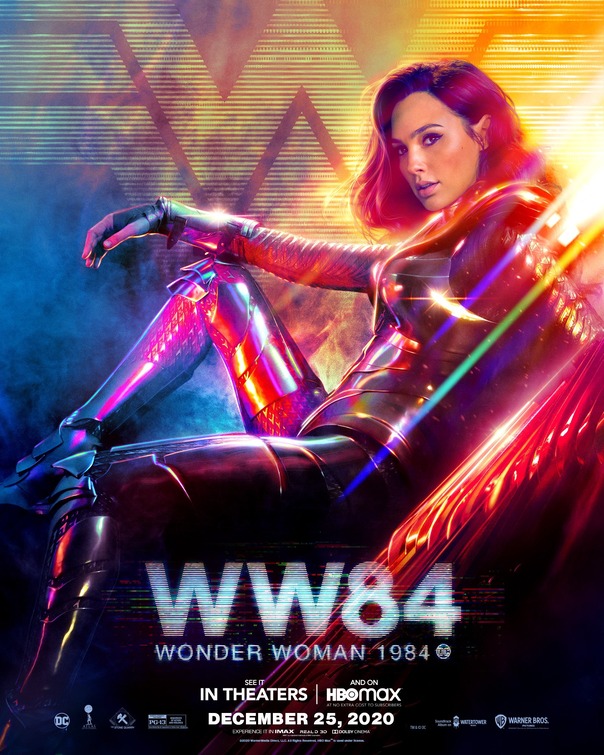 The only way that Wonder Woman 1984 works is if you look at it as the filmmaking team committing to a commentary on the self-indulgent excess of the 1980’s to the point that it takes the audience on the excruciating ride outlining just how awful that decade was.

Actually, let me start by talking about the few high points in this film before really getting into the myriad issues it presents. After we’re subjected to what I can only describe as Amazon Quidditch followed by young Diana being taught a valuable lesson that cheating won’t get you the win in Amazon Ninja Warrior, we flash forward to the titular 1984 with a slice of life showing coked out 20-somethings speeding in their Ferraris almost killing a Jazzercised jogger flashing to indulgent mallrats in all the latest 80s fashions with robbers hitting a jewelry store that apparently is running a black market operation because of course it is. Diana (Gal Gadot) takes it upon herself to save the jogger and bust up the robbery while saving civilians in a way that I can only equate to the opening of Superman III. I know, that movie is a garbage fire. However, one of the few highlights of that movie was the string of odd things happening in Metropolis at the beginning that Superman has to come in and fix. It was a charming start to this movie that was filled with wonder, and it provided the same spark that had me rooting for it. Unfortunately, There was still another 2 hours and 15 minutes to slog through.

It’s pretty much pointless to discuss the plot as it’s a mess, but essentially con man Maxwell Lord (Pedro Pascal) is taking advantage of the avarice prevalent in the time and swindling people out of their money to become owners of a public oil cooperative that sounds fishy from the get go. Somehow, he cons mousey Barbara Minerva (Kristen Wiig) into giving him an ancient relic that grants wishes, but not before Diana touches it and wishes for her life’s love Steve Trevor (Chris Pine) to be alive again. Cue the classic Monkey’s Paw trope (literally called The Monkey’s Paw) for the rest of the films runtime that threatens the globe with destruction.

Yes, there’s more to the plot, but it really doesn’t matter. When I say the film commits to the 80’s, they go ALL THE WAY. Any time there’s something that could use some explaining, they hand wave an explanation like The Queen on a parade. This goes way beyond the technobabble that’s prevalent in sci-fi or mystical elements in fantasy. It felt like there wasn’t much thought put into how things in the film’s universe work to an extent that most explanations in the film pull the viewer out with how little sense they make. It’s like something out of a generic action spectacular featuring whichever flavor lunkhead you prefer, but worse.

Unfortunately, WW84 continues the trend of comic book movies having the villain be the biggest weakness. At no point did I believe that Pascal’s Maxwell Lord was capable of actually doing he research to understand what the Monkey’s Paw was or how it worked. This was especially frustrating to me because Lord is the one villain I’ve actually cursed at while reading a comic when he offed the loveable Blue Beetle in Infinite Crisis (#JusticeForTed). This also extends to Wiig’s turn into Cheetah. The character’s transformation into another person was perfectly believable and one of the few highlights of the film…until the story dictated that she turn into an abomination that at least looked better than the CG in Cats in Cheetah.

Then there’s the final turn that takes around 45 minutes to explain of Lord’s plan to conquer the world. It entails getting various power brokers to make wishes that he sets conditions upon to usurp their power and working his way up the ladder to a Reagan stand-in and coopt the power of the free world. This is all done to, and I’m not making this up, get the planet to make a wish so he can get more power. When questioned about his motives when he already has so much power, his response is “why stop when you can get more?” It was at this exhausting point that I wondered if the entire exercise of this movie was to show just how pointless the quest for power and glory that so identify the 80’s are. Then I realized that would be giving the film entirely too much credit.

The most frustrating thing about WW84 is how good Wonder Woman was. That film showed that Gal Gadot is a capable actor. The No Man’s Land sequence still brings a tear to my eye due to the conviction of her performance. Chris Pine has always been a favorite of mine, and the charm he brought to Steve Rogers did nothing to change that. Patty Jenkins exuded style and prowess in action filmmaking while taking crucial time for character moments. For this film to be a bigger drop-off than The Dark World was to Thor completely flummoxes me. The film completely disregards consequences and implications of the events in the movie and only has one more thrill in a great cameo by Lynda Carter.